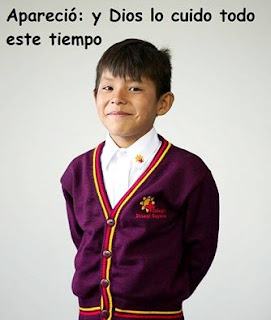 One month ago Danny, the eleven year old student of David, disappeared. Over the following weeks David and many others went out looking for Danny in Curahuasi and the surrounding villages.  His sister, Judith, denounced there Grandmother (who was their primary care taker) of physical abuse.  The court took Judith out of the home and placed her with Damaris our next door neighbor (because she was known and Judith wanted to stay with her).  Danny's dad appeared after 7 years of absense.  Danny's mom also came back.  Both their mom and dad live in the district of Quiabamba (which is more than 10 hours away).  Because Danny has run away from home before to look for his dad we thought he might have tried to go to Quiabamba and David and the school has started putting notices in the Cusco newspaper and TV (which is also seen by those in Quiabamba).
Caroline is a social worker from Germany who had returned to her country the end of this year.  Caroline came back to sort out the case (because she had worked very closely with the family during her time at Diospi and Danny and Judith had grown very fond of her) and help search for Danny.  Caroline had visited several orphanages trying to find a place for Danny and Judith to live afterwards.  She found one she liked in a village 1 hour away, Limbatumble, which was well organized and a Christian organization.
The orphanage accepted Danny and Judith. Caroline explained that they'd not found Danny yet, but when they did they wanted to send him there.  She sent a photo of Danny.  The next day they realized that Danny was already there.  He'd changed his name to Julio and said he was one year older than he was.
He'd been trying to catch a ride to Quiabumba, and the man that gave him a ride turned him into the city hall in Limbatumble who sent him to the orphanange.  But now he'd didn't want to leave.  Caroline when to visit yesterday.  He had gained weight and was doing his homework.  He was afraid that he'd have to go back home so all the kids where pleading with Caroline to not take him away.
The orphanage has about 40-50 kids.  They are divided into different houses with house parents. In Danny's house the house parents are a Peruvian couple with their two kids and 8 orphans.
Caroline was happy because the plan was to send Danny and Judith their. Also the judge in Curahuasi wanted them to go to the orphanage in Abancay because technically Curahuasi is in Abancay and Limbatumble is in Cusco. But the orphanage in Abancay isn't Christian and poorly organized. But since Danny was already in this orphanage for almost the whole month that he was missing, the Judge stopped arguing for Abancay.

Praise the LORD!!!  A lot of people and alot of kids have been praying.  God doesn't always answer in ways that we understand, but for the sake of the kids God answered exactly as asked....Danny was safe and with food the whole time!
Posted by Honduras at 3:12 PM