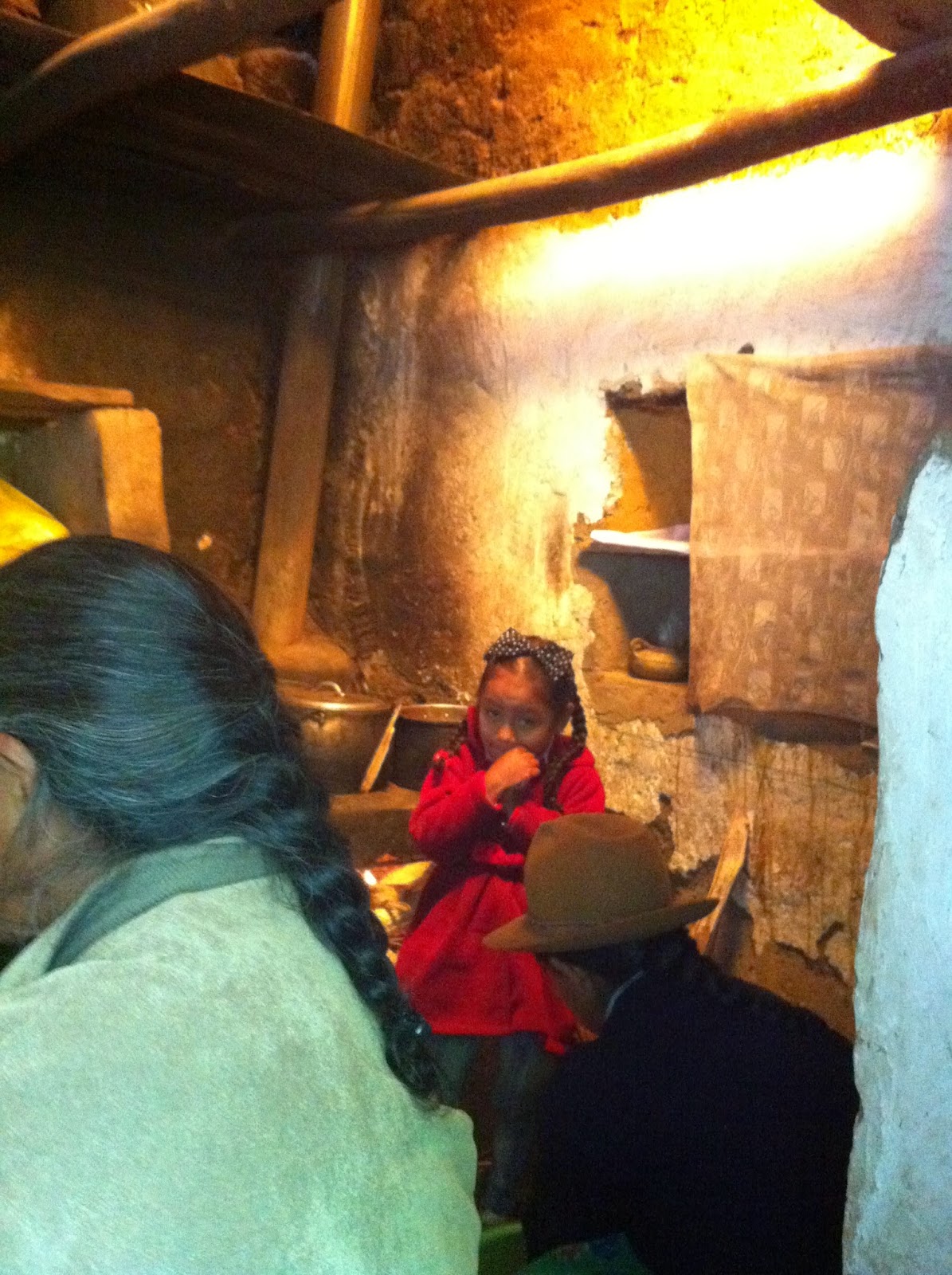 Where are the poor?
I´d been talking with Jemerson, the pastor of the church I attend, for a while.  We see poor, country folk in the hospital but we also see alot of rich people coming for second opinions, since they trust foreigners more than their own people.  Jemerson keeps telling me the real poor can´t afford to travel to the hospital.  And also that in Quechan culture is practically a last resort.  So I told him that if he planned a trip with the church and go with them.
The idea was a survey trip so that I could get an idea of what we were talking about, and the resources where we were going.  Jemerson talked to a brother, Barnabus, from the church in Abancay who travels out to rural villages church planting.  He had town villages a 30 minute walk from one another that he wanted us to visit.  The plan was to keep it small...
Yeah right.  The only plan that always comes to pass in Peru is God´s.  Initially it was to be me, Jemerson, and Juvenal (a nurse aid who works in Diospi with me and is in our church).  Then Marcos (from the church, who is now working a the traveling pastor at Diospi) said he´d come.  And the day before we left, two other gals from the church, Yael (a German nurse) and Esther (a Austrian nurse), found out what we were doing as I collected equiptment and medicines from the hospital to use and asked if they could come too.  Rachel (a Peruvian agricultural engineer, who had been working in Curahuasi and attending the church, returned to Curahuasi to visit and ended up deciding to come all too.  I was the oldest in our group probably by at least 4 years ...
Early Saturday morning we met up in Abancay ---Juvenal never showed up (ended up he got pulled over on his motorcycle by police who wanted a bribe.  He wouldn´t pay it and so they confiscated his motorcycle for a day until he could sort everything out)---and from there drove about an hour to a small village.
The first three photos are us eating breakfast before starting to work.  Two brothers from the church in Abancay who have been church planting out in these villages came with us.  You can see them in the photo below.  THe women behind is a member of the church who opened her home to us.  This is were we ate a couple meals and us girls spent the night in one of their rooms. 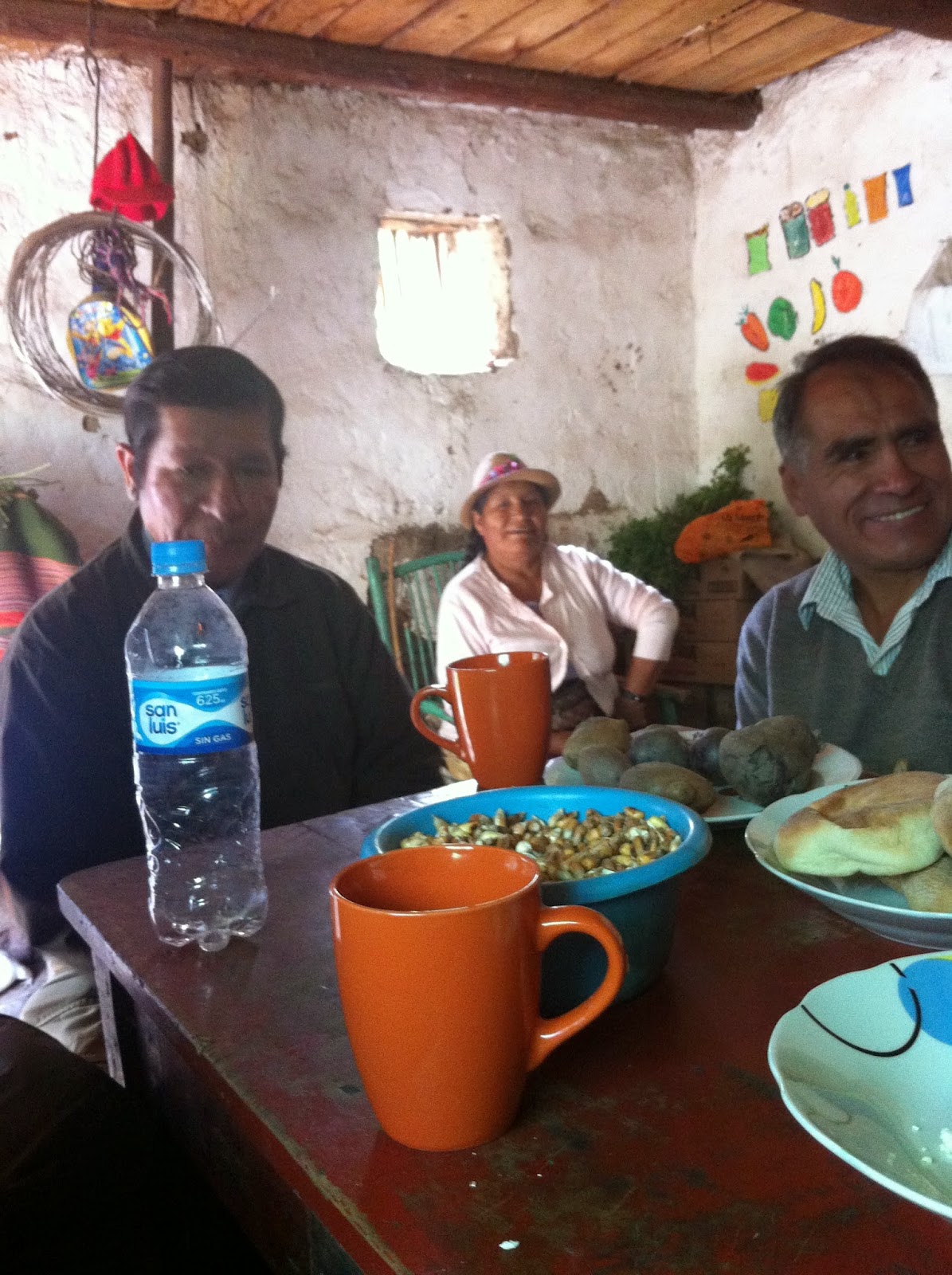 Breakfast was potatoes, dried corn, cheese and bread.  All of it was to be eaten with fingers. 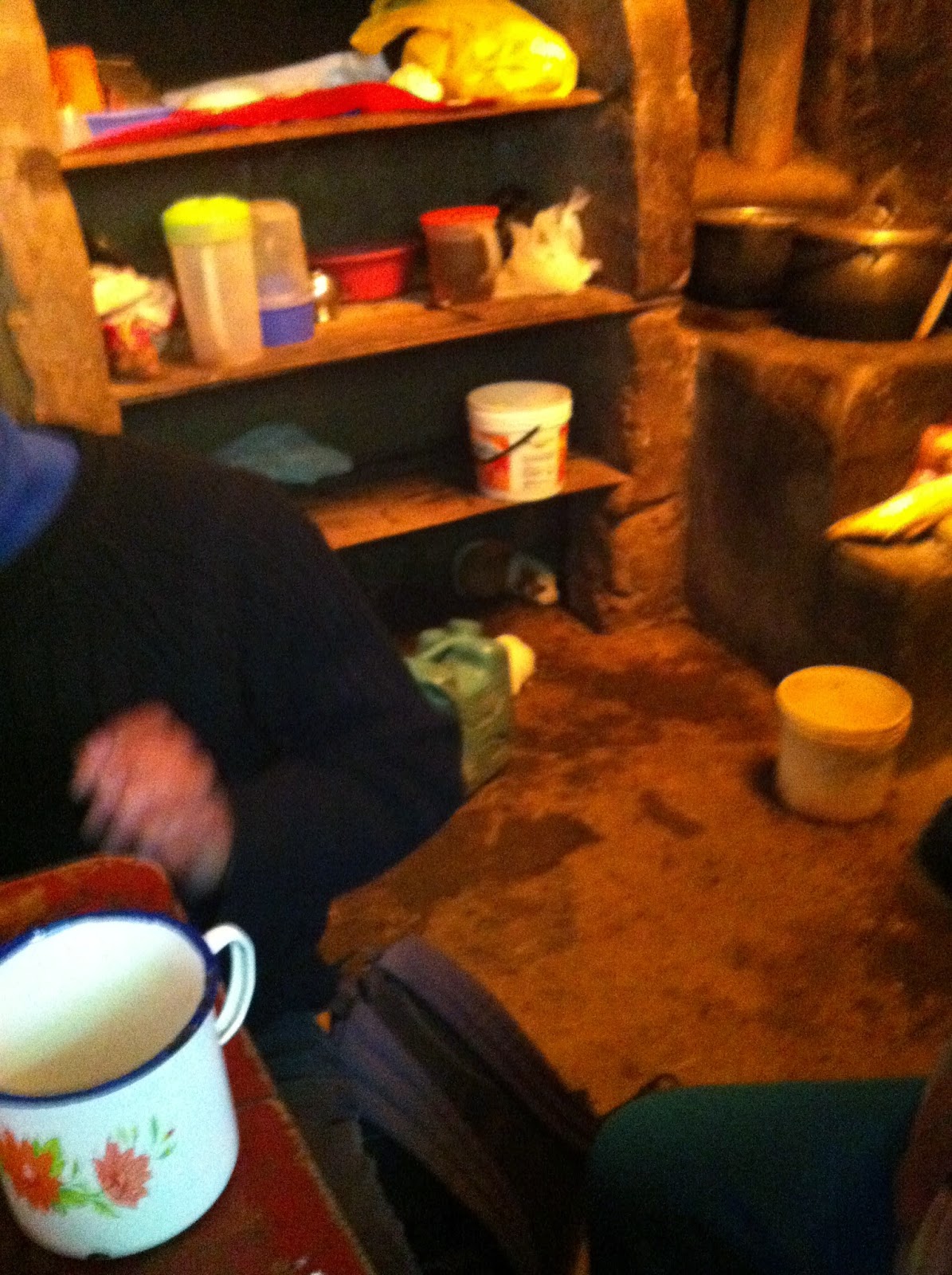 In the photo above you can see two white blurs running below the shelves.  Those are are two of the 20+ guinea pigs they had running around the kitchen.  The door was open but they wouldn´t run outside.  ¨They´re of the house¨ Jemerson kept saying to explain why they didn´t try to escape like any normal guinea pig in the States.  A couple cats kept passing in and out of the kitchen through a hole in the adobe wall.  Again Jemerson responded, ¨They´re of the house.¨ to explain why the cats didn´t try to eat the guinea pigs. 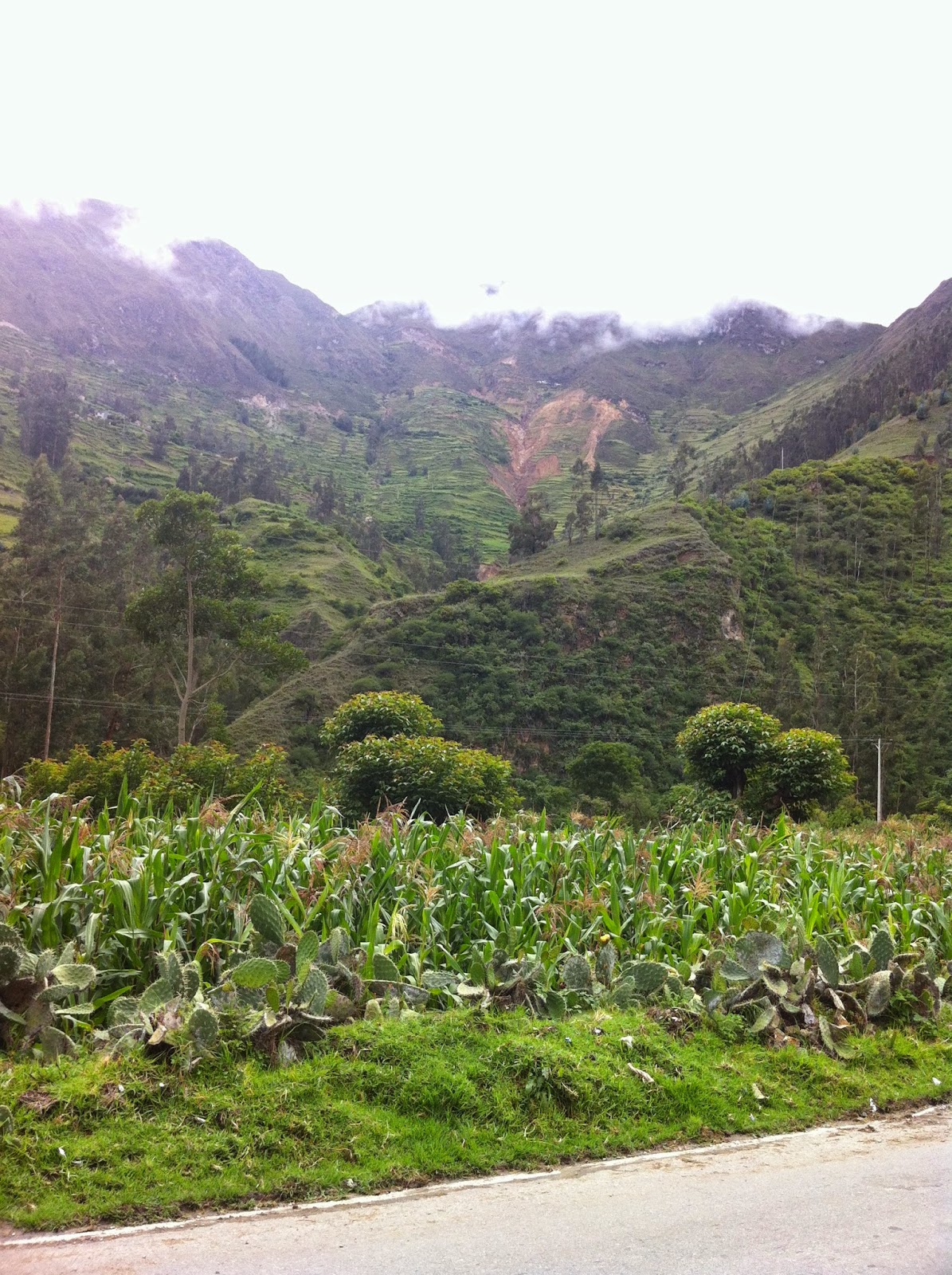 After breakfast we went down the road to the church where we had our clinic.  It worked out perfect because we had three medical profesionals and three Quechau speakers.  And we began to care for the multitude.  Jemerson volunteered to translate for me.  This was a joy for me.  I think a pastor here can easily listen to the patients complain about all their problems and aches and pains and think,¨This person needs a doctor.¨ When in reverse I see all these people complaining about their aches and pains which are simptoms of their depression, anxiety and lack of a close trusting relationship with God and think, ¨These people need a pastor to talk with.¨ It was a joy to work with Jemerson because he could see what I see day in and day out and realize that what he does is so essential and precious to the real health of these people.
I´d asked to see between 15-20 people maximum a day because I´d worked all week and wasn´t able to take vacations this time of year.  I think we saw up to 30-35 a day documented, and more, undocumented.  At one point to get through patients faster without compromising their care, I had Jemerson seated on one side of me with a patient and Rachel seated on my otherside with another patient.  I´d listen to one patients complaints translated to me, hand their translator a pile of various educational handouts based on their problems and a perscription with their meds and then leave their translator to explain the handouts and medicines.  I´d then turn to the other translator and do the same.  It was really nice because it allowed their translator time to explain the handouts well, talk to the patients about their faith, and share the gosepl with them if it was appropriate.  This was obviously towards the end of the day when our non-medical translators had learned the educational talk for gastritis, constipation, back pain from poor work posture and how to lose weight diet by heart.
A really funny moment was at the end of the second day a heard Jemerson reciting to Rachel by memory the gastritis diet handout. 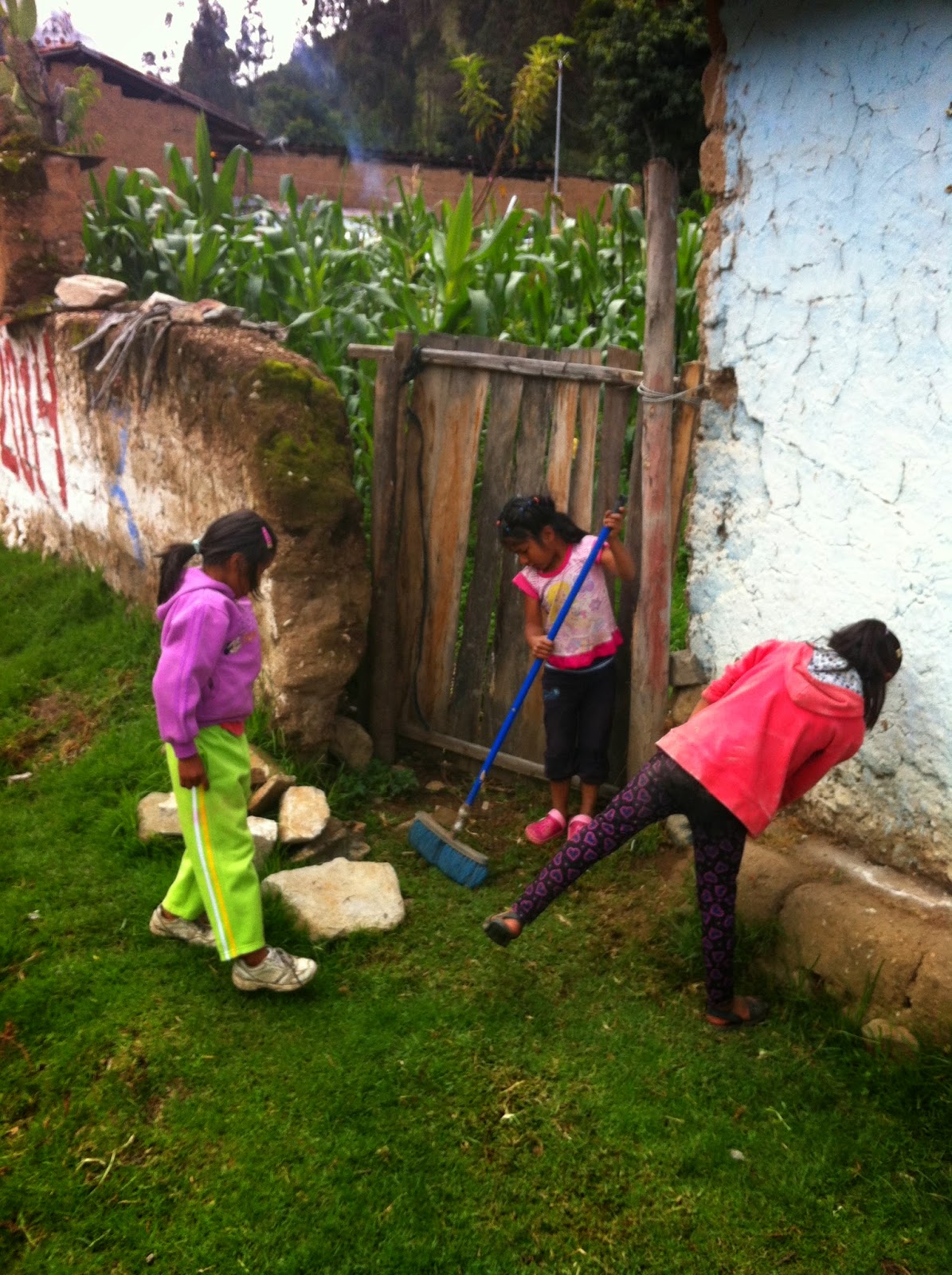 Girls sweeping up the grass out side of the church. 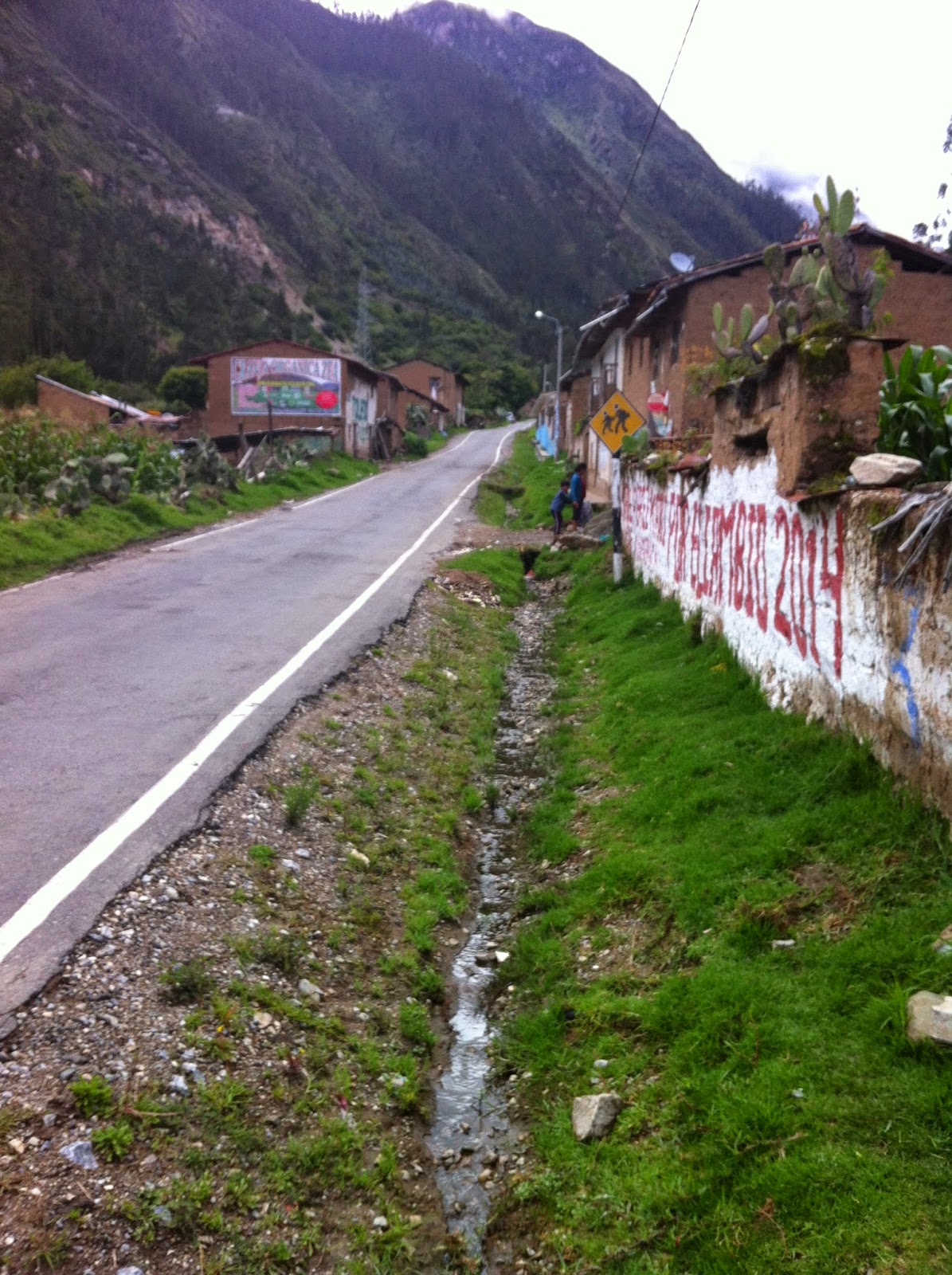 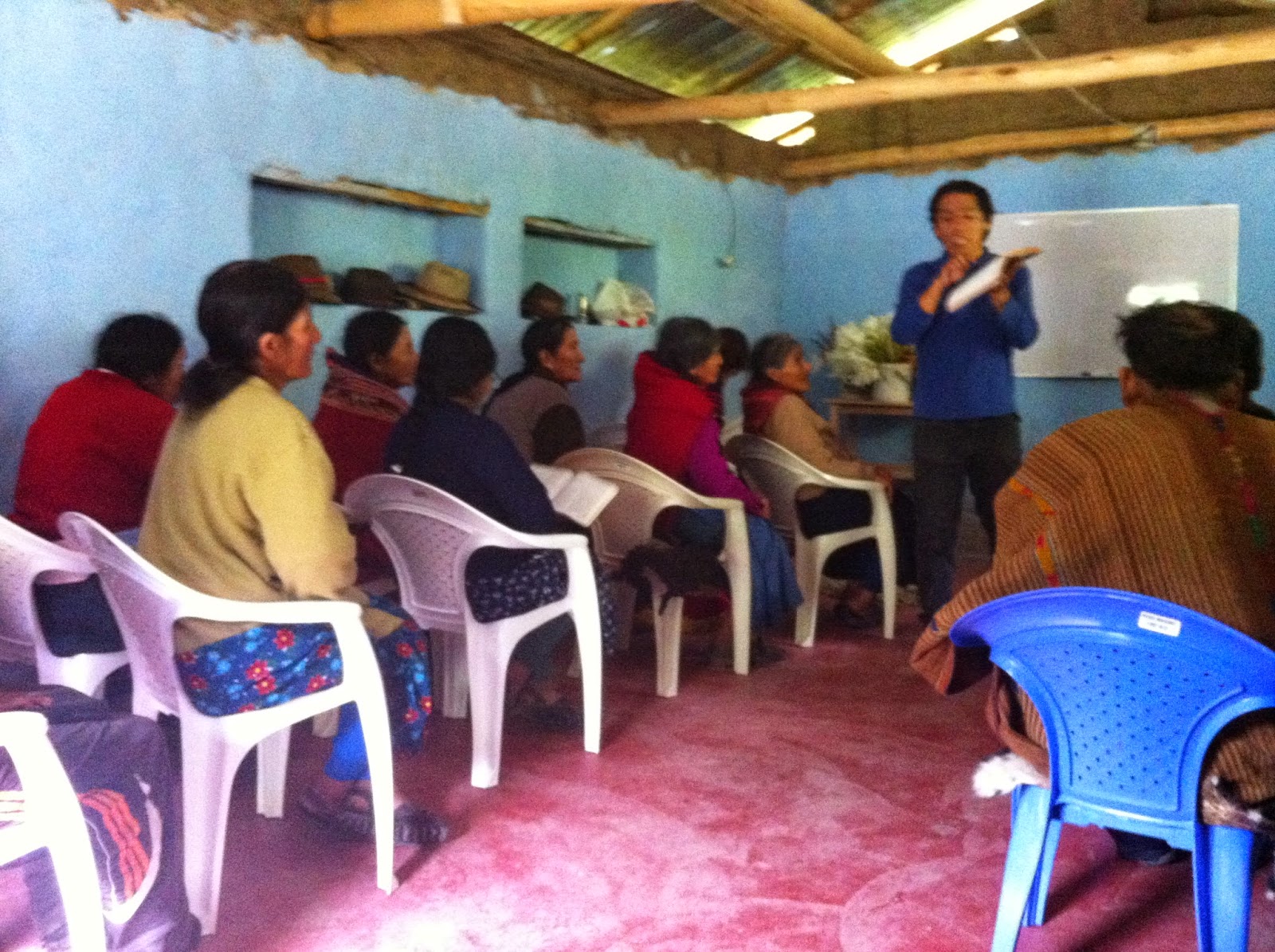 Sunday morning we ate breakfast and headed up the mountain to the next village.  The car made it part way before we had to get out and walk the rest of the way because of the mud in the road since it´d rained the night before.
The picture about is Marcus preaching in service Sunday morning at the second village. 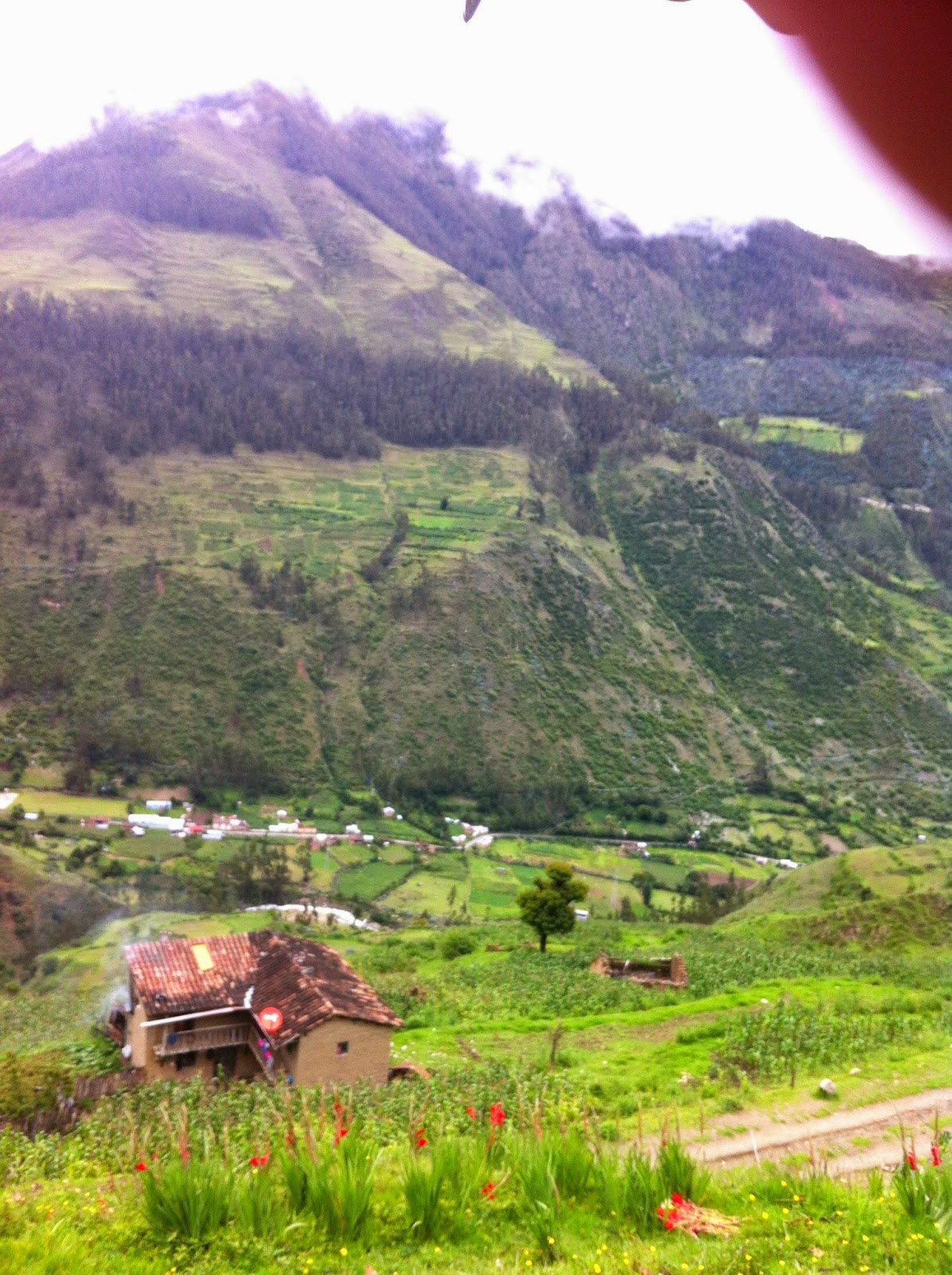 View from the second village  looking down at the village were we´d worked the day before. 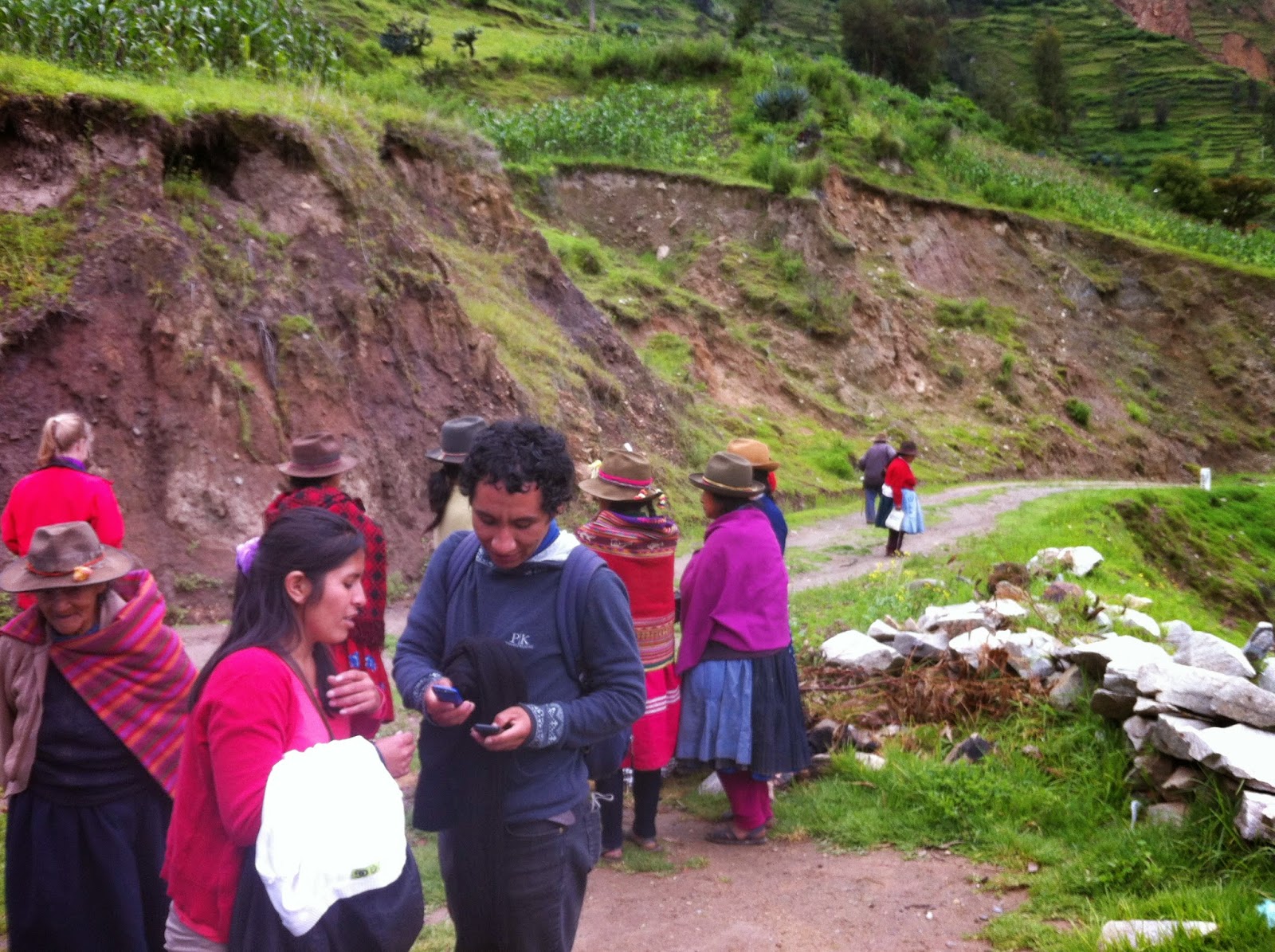 Rachel and Marcus after church service, with the women of the congregation standing around in the background. 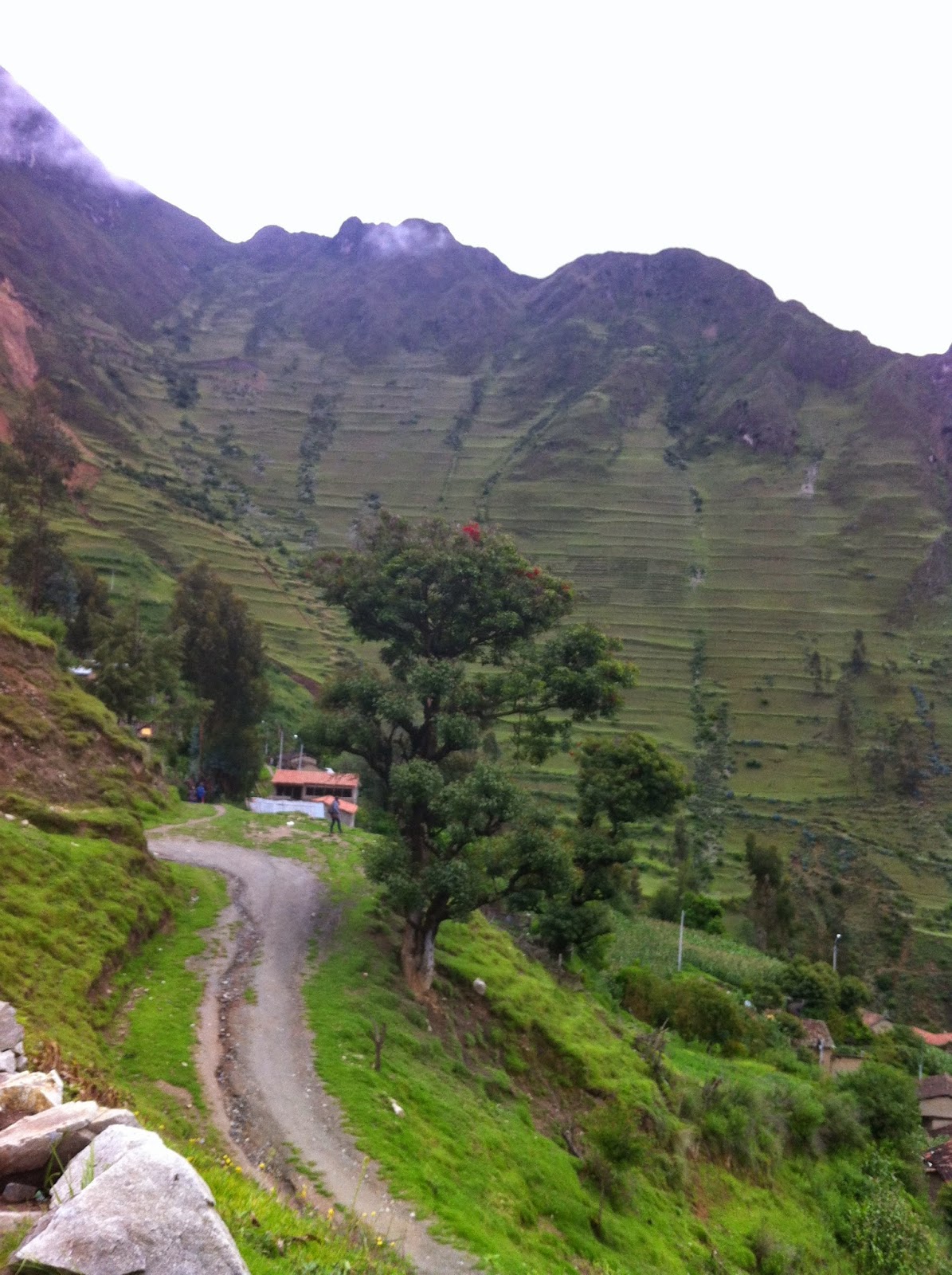 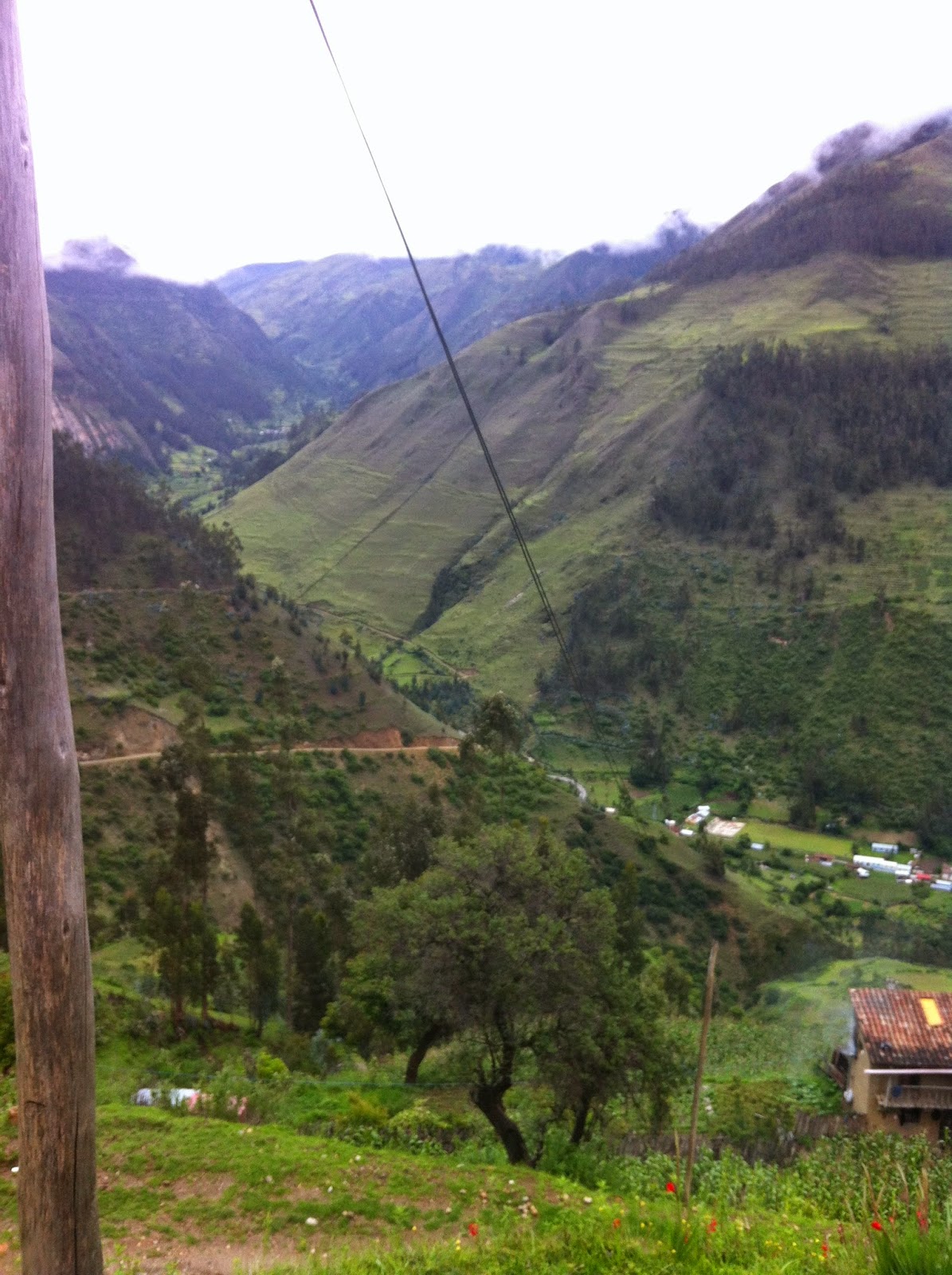 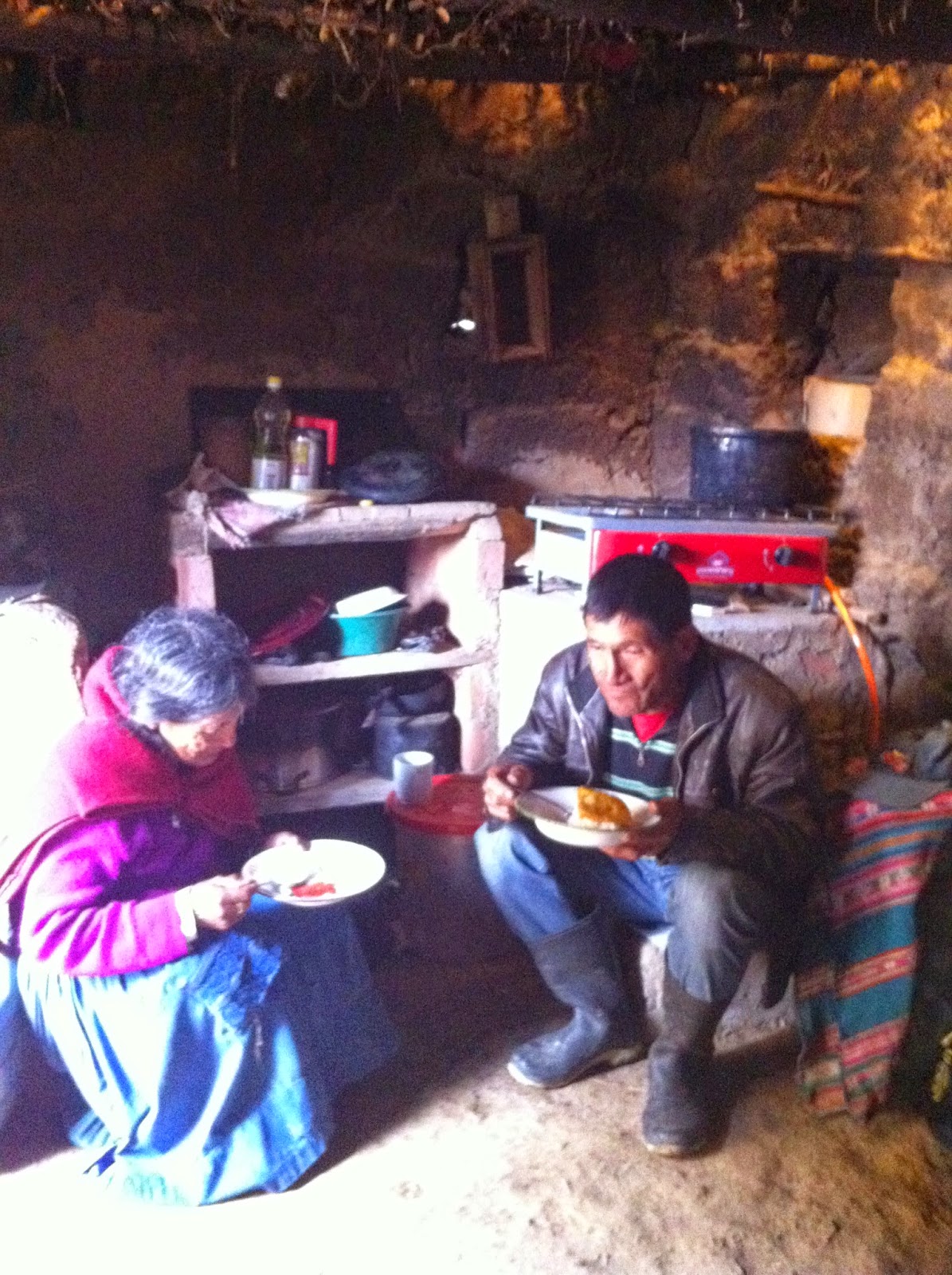 Second breakfast.  It´s very rude to not finish your food in the Quechua culture.  It means you don´t like your host.  Unfortunately the Peruvians eat a whole lot more than us foreigners.  Even if I ate until I was sick I wouldn´t be able to eat all my food.  Thankfully the three Peruvians who were with us from the church knew this and always sat next to us and helped us eat our food. 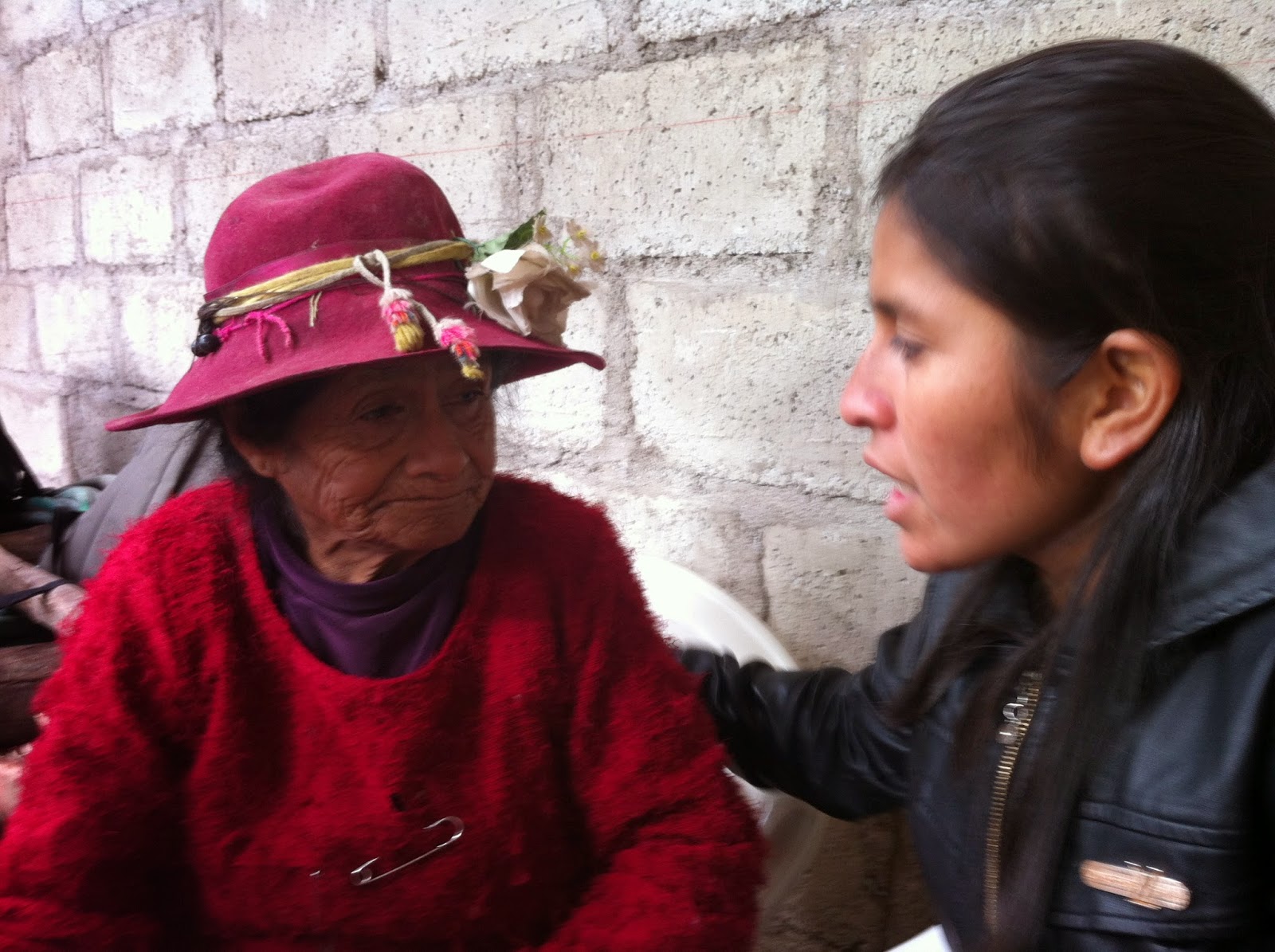 Rachel talking to one of the Peruvians.
After church and after second breakfast we started our clinic.  Jemerson was right.  We found all the 70-90 year old Peruvians who´d never seen a doctor in their life.  The first day I had a male patient 96 years old who at first seemed normal but quickly talked off in wierd tangents, so that I realized he obviously had severe demetia.  He complained about his head hurting.  Then he showed me his huge incarcerated abdominal hernia (he probably had up to 3 feet of intestines that had slipped out of his abdomen through a small hole in the abdominal muscular wall and wouldn´t go back in).  This is a surgical emergency.  I offered to give him an appointment with the surgeon so that he could get in quickly the next day....But,  I couldn´t convince him to seek medical care, so I gave him medicine for his headache and let him go. 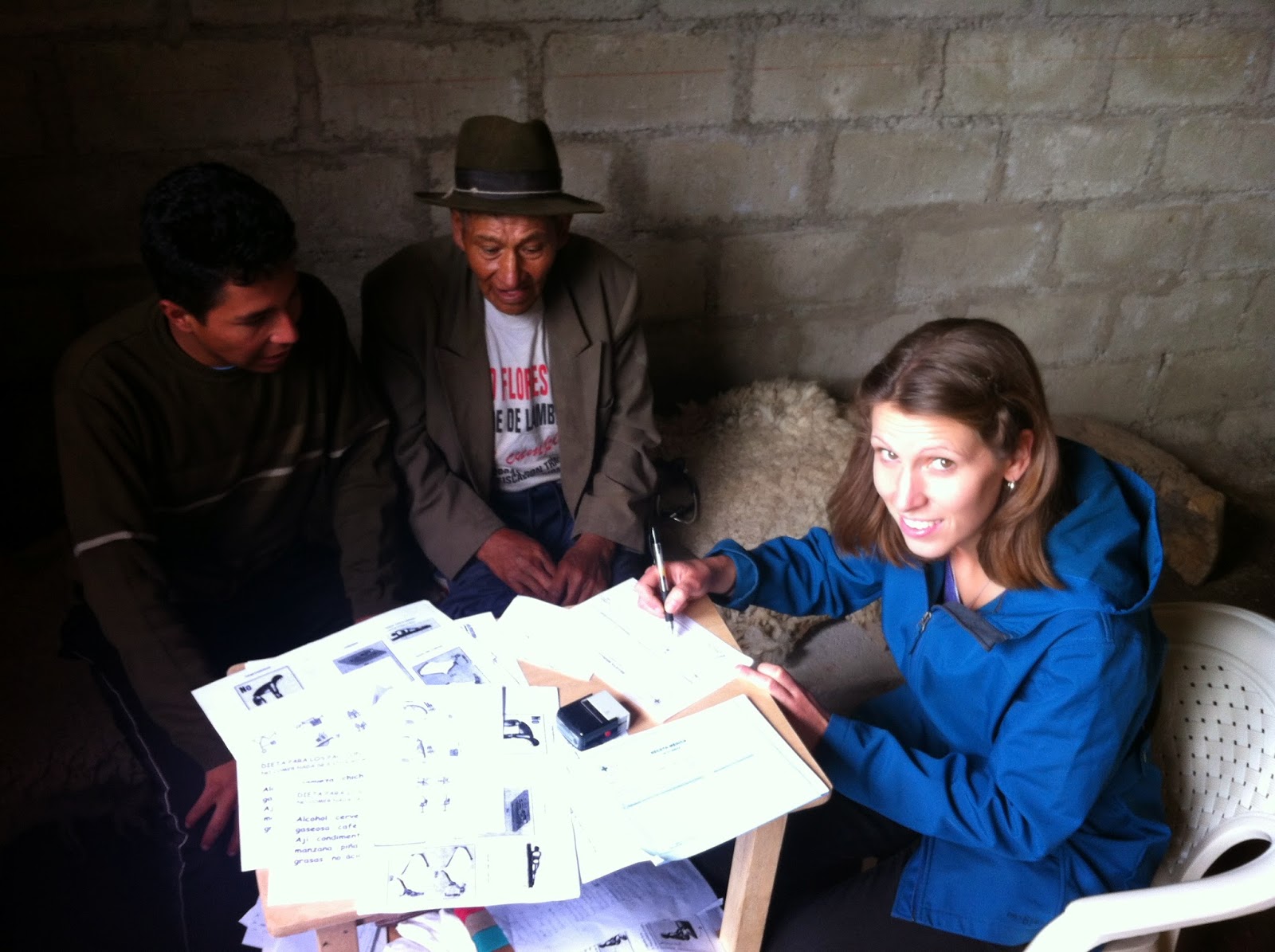 Here´s Jemerson translating for me.  The majority of what we saw was musculoskeletal pain because the majority (even the elderly) were still working taking care of their animals and working their fields. 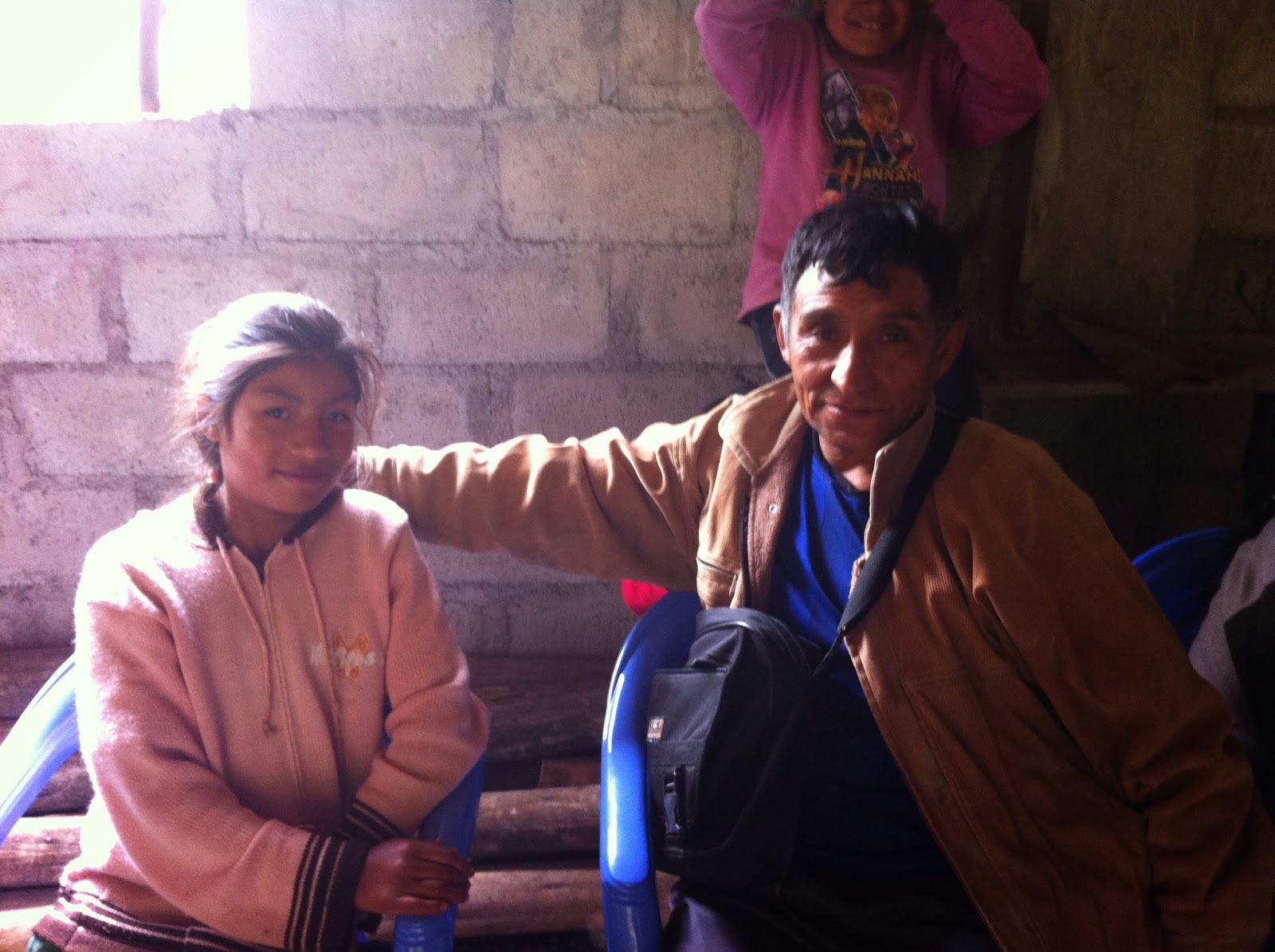 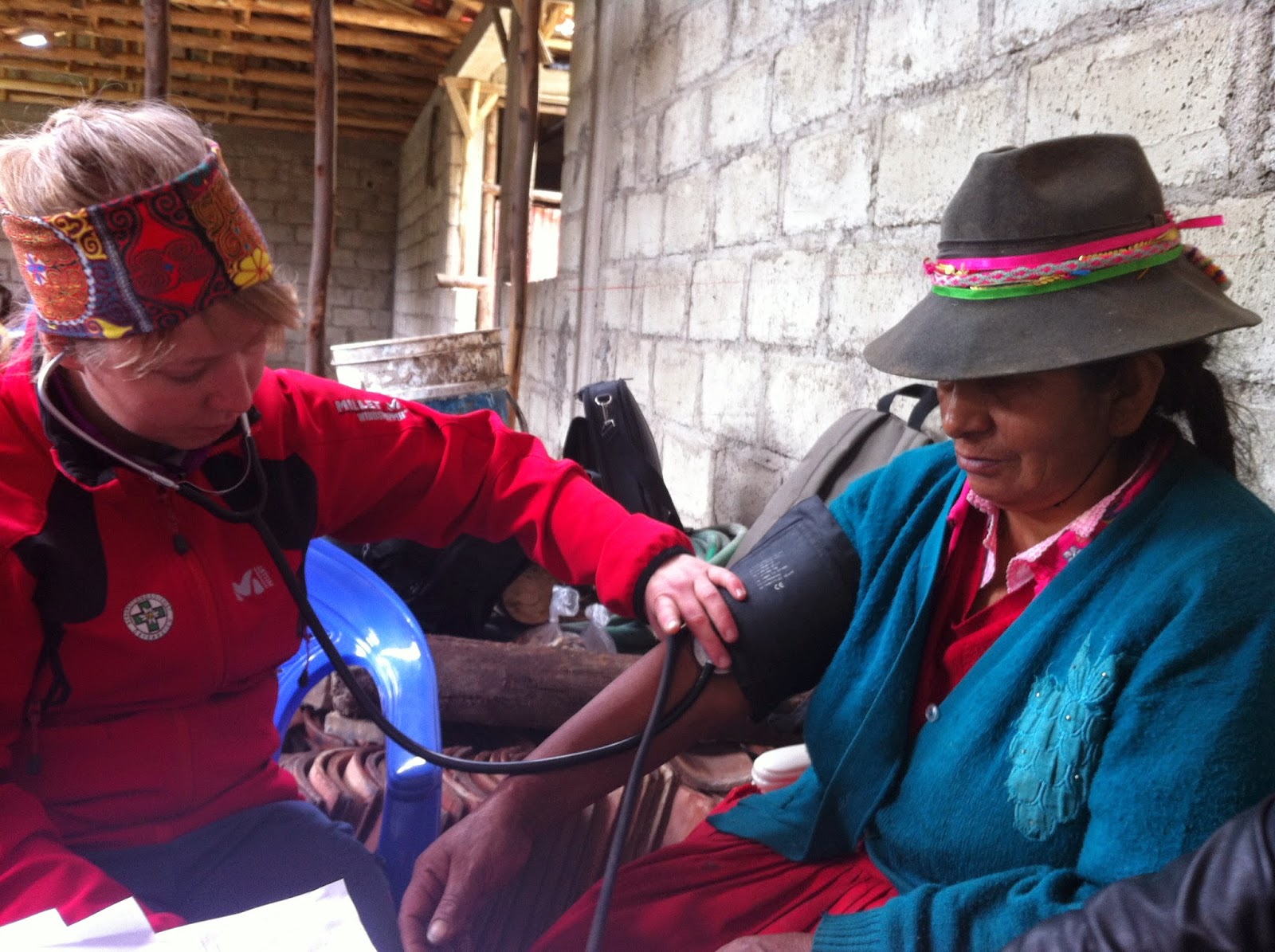 Esther checking the vital signs of the patients. 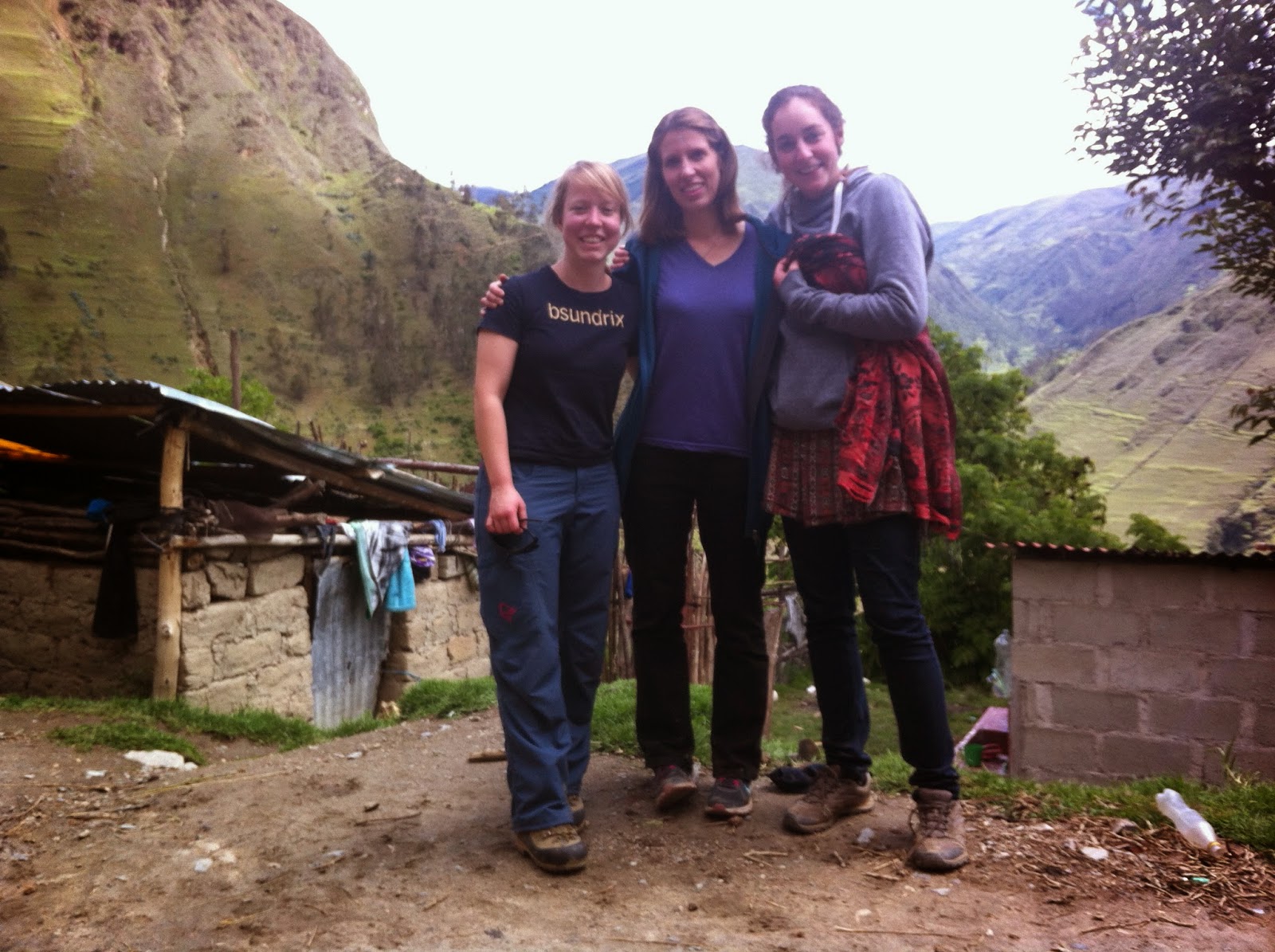 Esther, me, and Yael. 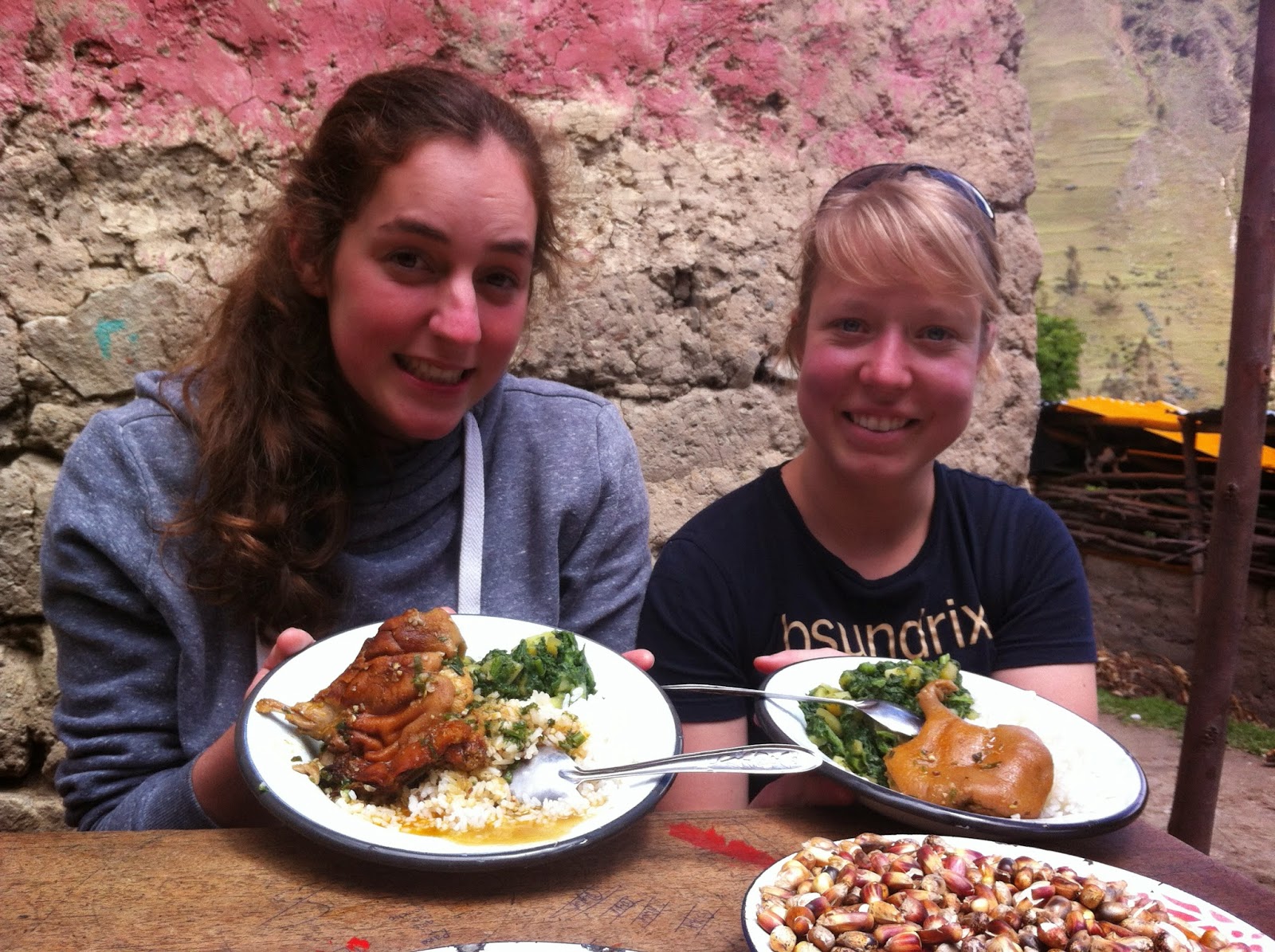 Guinea pig for lunch.  It´s not horible but I feel bad eatting something that is so expensive and special to the Peruvians. I ate some and let Jemerson finish the rest of my leg since to him is a precious delicacy.  The hardest thing about eating guinea pig is that it still looks like a guinea pig when you eat it.  I watches Jemerson holding the head (his favorite part of the guinea pig) and eating the meat off the skull ) including eyes and brain.
We returned to Curahuasi that night, exhausted and full of the joy of the LORD. :)
Posted by Honduras at 1:13 PM