Pregnant, Anaphylaxis and a Human Knot


Friday night through Saturday night was nice and eventful.  I was on call Friday night.  The missionary, Will Caire who hosts English bible study Friday nights was out of town on vacation, and so there was no group that night.  I was hanging out at the hospital when I received a call that a couple of the young adults from the church where going to eat out at almost 8pm and I was invited.  So I went.  Claudia had invited everyone.  I didn’t realize it was a special occasion.  But when everyone had arrived she said, “I have a announcement to make…”  We all went to Claudia’s wedding in December (her wedding photos are on the blog).  Knowing it wasn’t her birthday, and she already was married, jokingly I said, “You’re pregnant!”  I was right J  After a fun night joking around with my friends I returned to the hospital to sleep. 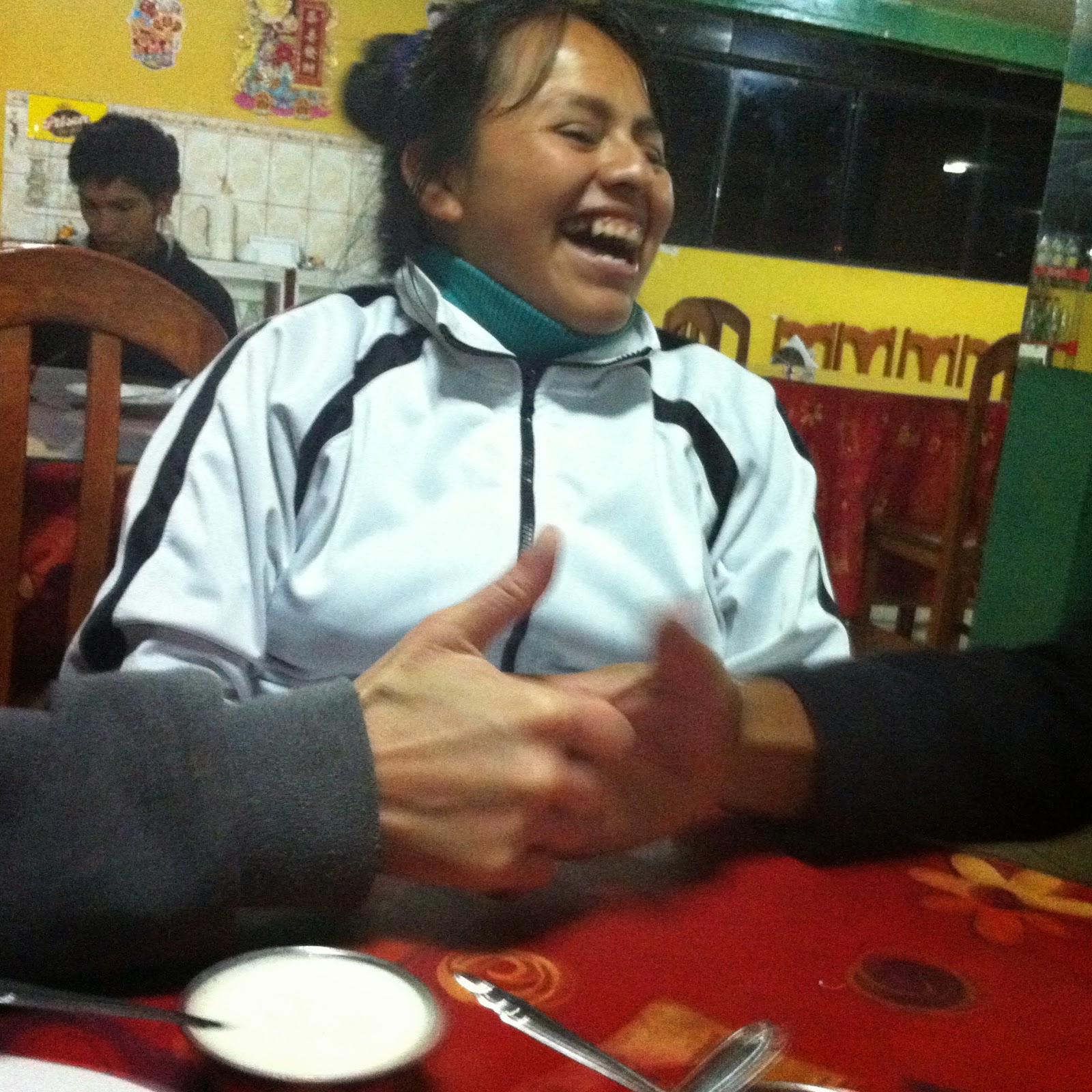 (Claudia laughing as Miqui and I thumb wrestle :P ).
I was awaken at 5:30am by the nurses, “There’s a foreigner here with a sore throat and she’s pregnant.”  Half awake I got dressed a walked out to the nurse’s station wondering since when a sore throat was an emergency and also if they were tourists since the nurses hadn’t referred to the patient as a missionary.  I walked into the ER to find my friends, Crissy and Shaun, who are Americans serving as missionaries working with a mission separate from the hospital but run by one of the Australian missionaries who works as an ultrasound technician at the hospital.  Crissy is 27 weeks (about 7 months) pregnant.  I asked what was going on.
Crissy working hard to take in air (almost with the sound of stridor), trying to explain the situation with a hoarse voice, completely panicing.  Inside I began to panic.  My least favorite type of patients are friends who are pregnant and I think could die if I don’t treat them and I think I can hurt the baby if I do treat them.  She  explained that she felt a tickle in her throat the night before and thought she was about to develop a viral infection.  But she woke up in the middle of the night, feeling like her throat was swollen shut or something was stuck there and she couldn’t breathe.
Her lungs where clear, her tonsils normal sized, oxygen saturation 100%.  My brain said anaphylaxis, but she had not other signs: no nausea, vomiting, wheezing, rash, etc.  And of course she’d didn’t want me to give her any medicine that could potentially hurt the baby.  So I started with the class B medicines (in Pregnancy there are various classes of medicines: class B= safe, class C= we don’t really know, class D= harmful to the baby): Albuterol nebulization (she said her chest felt tight), Benadryl, Ranitadine, and Tylenol.  I asked Shaun if she’d had panic attacks before, he said “no, but she’s prone to panic.”  Me too if I can’t breath.
We usually also give a steroid (like Prednisone) in anaphylaxis (class D), and the only medicine that matters in whether or not the patient lives: Epinephrine (class C), and for the best prognosis you have to give it within the first 30 minutes of the patient presenting in the ER.  I called the OB-GYN to see if EPI was safe to give because some class C medicines we give all the time without problems.  Jens responded I could given any medicine I needed to give.  Great help, that meant what I lecture I listen to always says: the worse birth defect is if the mother dies, because the baby dies too.  I mentioned to Crissy what I was thinking and that I wasn’t to give EPI.  She was still receiving the breathing treatment at that point at that time and feeling a little better, so she refused it and said she wanted to wait and see if the other meds helped.  In the USA as a physician I can only suggest treatments.  If a patient is in their right mind, I can’t force any treatment on them even if it will save their life.  Usually when I’m convinced that a patient needs a certain treatment I can convince them to agree…but at this point I still wasn’t convinced 100% it was anaphylaxis.  There was no trigger.  Only one system (upper respiratory) was involved, not two…which was part of the diagnosis.  But when nothing else really helped and Crissy continued to work hard to suck in air, almost with a stridorous sound and we were nearing the 30 minute mark I walked in and told her I wanted to give the EPI (inside I was completely worried).  Afterwards she told me that before I had walked in that last time she’d told Shaun she wasn’t going to accept the EPI, but I told her with such determination that it was what she needed and I told her she had to receive it within 30 minutes to have the best prognosis that she relented.  Five to ten minutes after she received the EPI I walked back into the ER and she was completely different.  Still with a hoarse voice, but breathing easily….it was anaphylaxis.
I called back later in the day to see how she was…fine.  That’s when she told me the other parts of the story and I told her that she’s my least favorite type of patient.
A couple hours later I left the hospital to join the jovens of the church who were playing volleyball.  I left after an hour or so because I was feeling pretty bad from the adrenaline after having Crissy as a patient, and not eating yet.  That night we had Night of Jovens (adolescents and young adults) at church.  Miqui (who works in IT  at the hospital) was recently put in charge of the Jovens this year.  They started a more structured evening including a study on the life of Jesus and ending with interactive games/ice breakers.  I was in charge of the games this night, so I taught them the Human knot.  Here’s some pictures. :) 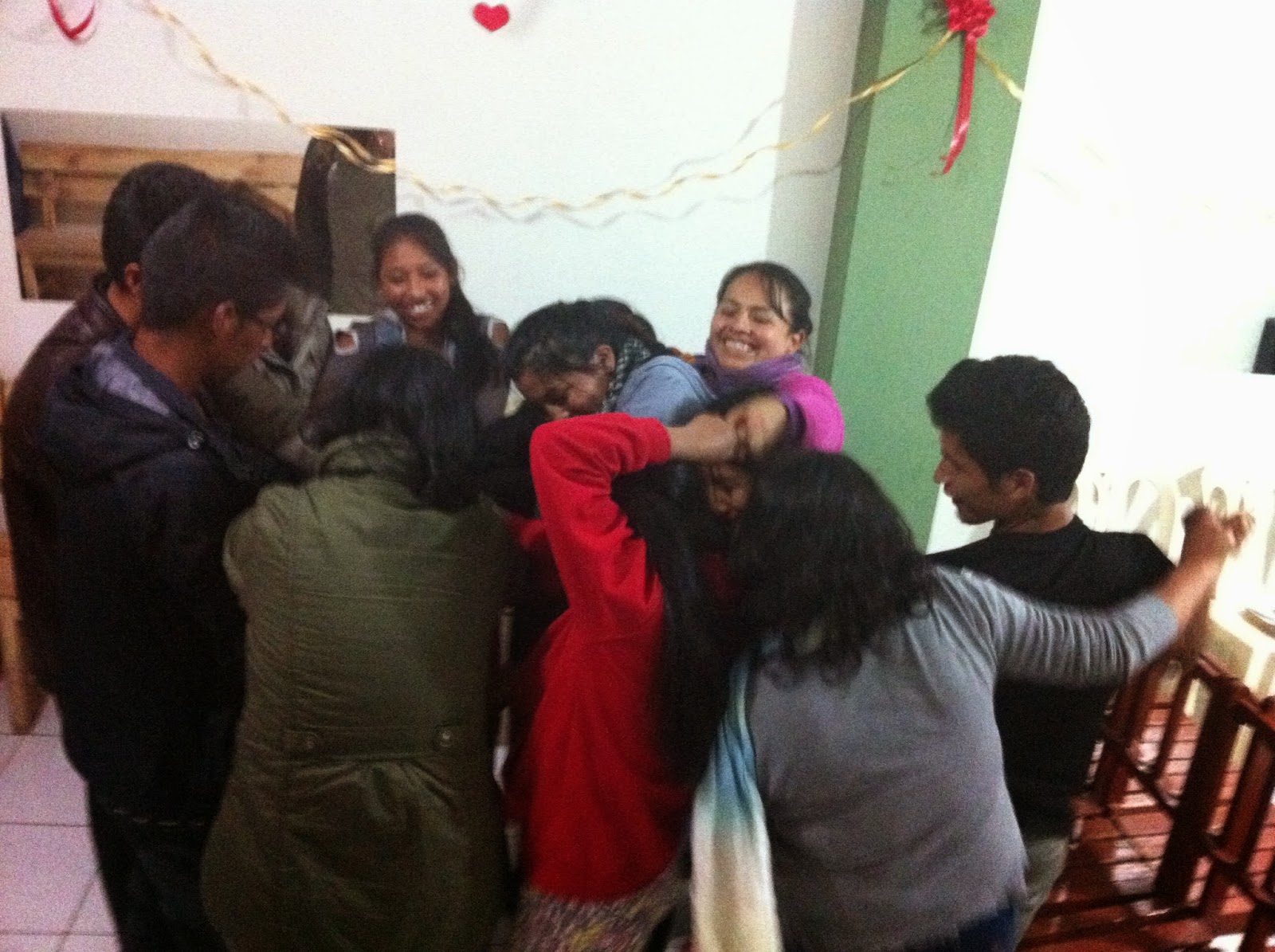 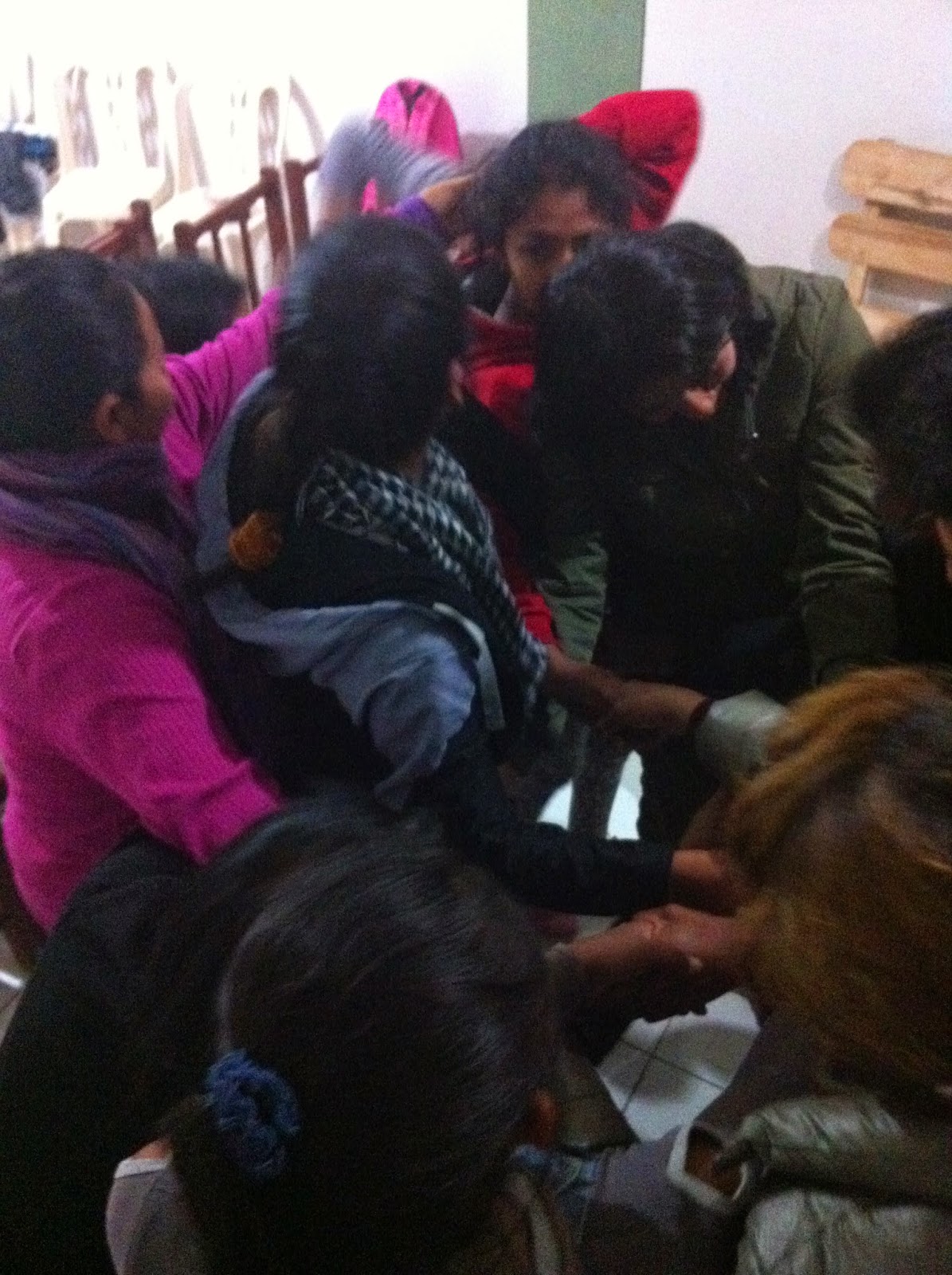 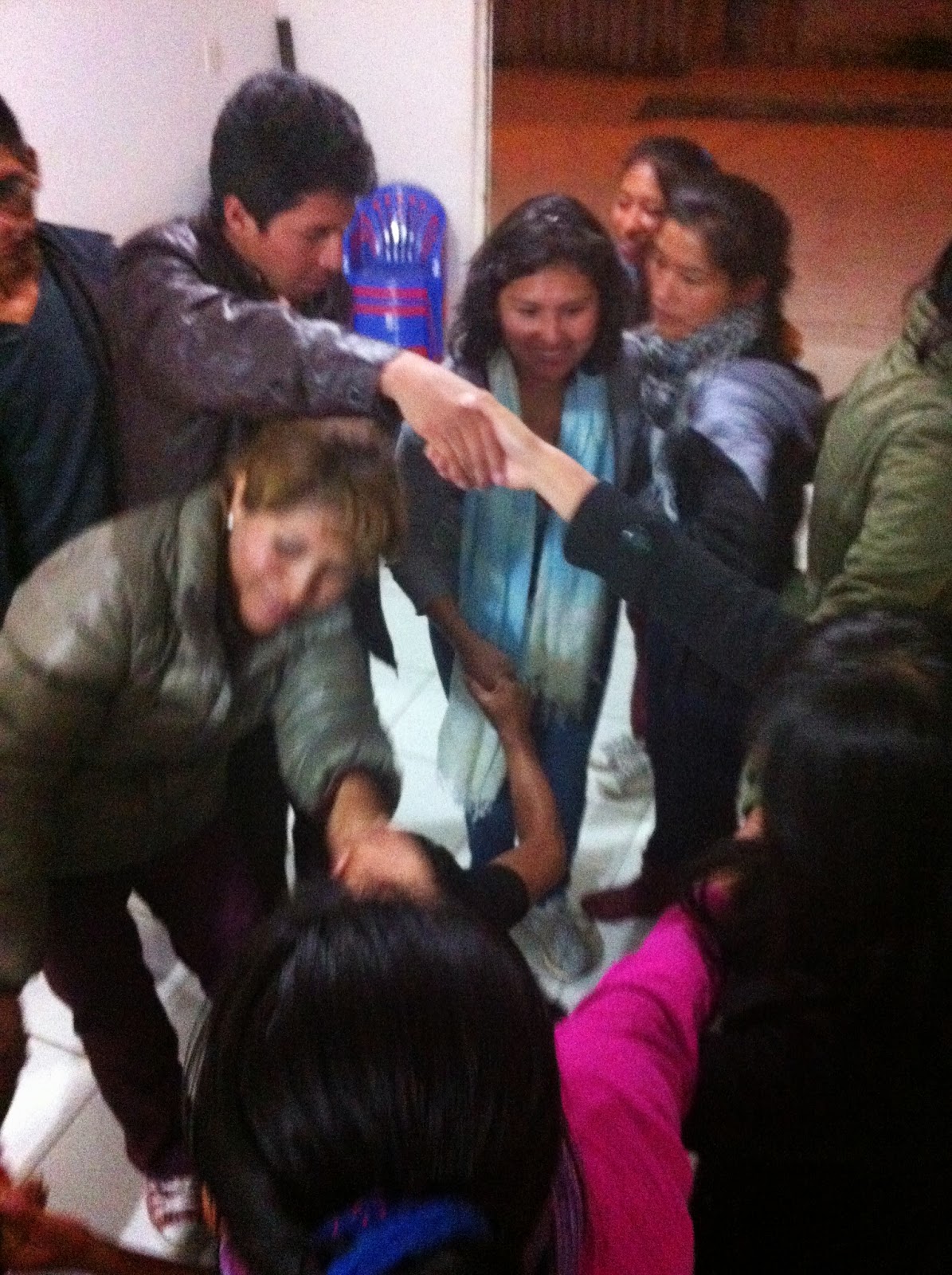 Please pray for the jovenes of the church and the Night of Jovenes.  There are a lot of ministries for kids in Curahuasi, but less for the young adults, who get pulled away from God by the very strong influence of culture.  Also pray for Monday nights.  We finally finished Beth Moore's Believing God series last week.  Monday we will start a book called: How to be a Woman of Excellence.  Please be praying for this study and that God brings the women.  There's a lot of negative influence and pressures place on the women in this culture.  Pray that God uses this opportunity to help them learn to please Him and not man.