Playing Frisbee with arms tied together with Shoelaces?---August 2016 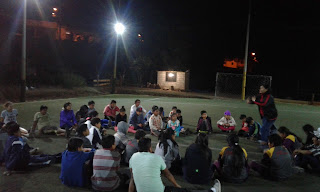 Playing Frisbee with arms tied together with Shoelaces?

Our group of frisbee was up over 60 youths each week.  Our desire is to have fun but also to share with them about Jesus each week during a 15 minute break halfway through 1.5 hours of play.  The youth don't pay to play, but David said they they'll apply themselves more if there's a little cost.
So David started weekly Challenges.  The Challenge of the week in this photo was to bring a shoelace. After the teams were formed the players tied their shoelaces together in pairs of two. If someone hadn't brought a shoelace then they where tied closer to their partner.  In order to free themselves in order to play better, each person in the pair had to recite them memory verse of the week.  This week the verse was: "This is my commandment to you to love your brother.  There is no greater love than to give your life for another."  Then the devotional message (given by Janet the Preschool teacher at Diospi, pictured above) was about friendship and choosing friends who are good influences on us.
During the message now the youth recite their memory verse to us and through the message they're able to understand it better.  I've noticed the interest and the spiritual maturity of the group has increased alot. 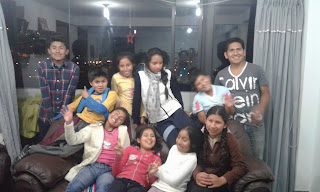 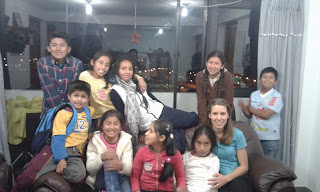 We're now about 2.5 months into our Discipleship program. Pictured above is our steady group, lacking only Ivette . Please pray for these youth (who range from 10-16 years in age).  This is my greatest joy of each week.  I feel that each one has been called specially by God, and that God has just given us this priveledge of helping them grow closer to Him.  We're on book one of a discipleship series of 4.  This book emphasizes the spiritual disciplines. We've covered: time with God (a daily devotional---which they've all faithfully started), live in the word (which includes reading the bible each day and memorizing scipture), Pray with faith (which includes documenting their prayers and God's responses to their prayers), and currently we're in the section about Fellowship with other Believers (which talks about regular attendence in churches as a way to love and serve our brothers in Christ using our talents and skills that God has uniquely given each of us).
This week I asked them, how many of their feel that their faith has grown and feel closer to God since starting the study...and all their hands went up.
Please pray for Igor. David and I were praying and talking about him this morning during our daily run.  I feel like he's our potential "Judas" of the group---someone who's motives aren't completely pure.  I feel the words he says give them impression that he's not here to personally know God (in spanish, "conocer") but thinks being Christian is about knowing about God (in spanish, "saber").  Pray for his heart, that God changes it and that we can begin to see some fruit.
Please pray for each one by name.  They are each so precious to each, so hungry and thirsty to know God, but I feel like a shepherd sending my sheep out among the wolves.  They live in a tough world.  Christian, is 16-years-old and finishes highschool in December 2016.  His plan is to move to Cusco and study in an University.  Pray for him and the many temptations of women and other things that he will encounter there.  His mother is VERY Catholic.  Pray that God helps him establish a solid foundation of searching for truth and God's will through reading and knowing the Bible. 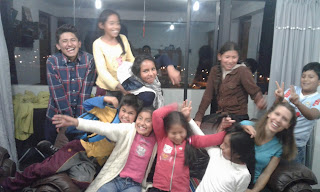 Ivette is in David's fifth grade class and also in our discipleship group.  Every Saturday David motioned for me to watch Ivette read the scripture that we ask her to read.  I observed as she held the Bible one centimeter from her nose to be able to see the letters.  She had glasses that she never used.
So we talked to Dr. Ursula the opthalmologist here to give her an appointment. She messured her eyes.  Then Ivette went to find frames that she liked.  I had another commitment, so I left her there with her mom and Amerigo (the Otomotrist).  Afterwards we asked about the frames she'd choosen.  "Box frame and white," she informed us. "And do you like them?" I asked. "No," she replied.
David and I talked afterwards.  Why had she choosen lense that she didn't like. I figured that we'd just have another pair of glasses that she never used. I talked to Amerigo and he said that he'd only offer for her to choose from lens in the donation section.  Since we had offered to pay for her lens I said to let her pick from the for-sale section too.  So she came back with her mom and  we found a nice thin frame that complemented her face.
That Friday Ivette's glasses were ready to pick up.  The next day in our Discipleship group, for the first time she was the first everytime to raise her hand to read something!  She was so happy that she could finally see!

Curahuasi is a Small Town

Curahuasi is a small town and that means everything is conneted. One Saturaday morning we awoke to the doorbell ringing at 6 AM. We answered the door phone and it was the mom of Maria Pilar (in David's fifth grade class) and Andrea (in Davids 7th grade math class), two of the girls in our Sunday school class and in the discipleship class.  I went down to the door to see what was wrong.
In tears their mom, Soledaridad, and her sister-in-law explained that they had finally brought Saldaridad's brother-in-law (the wife of the other lady) to be evaluated.  He already had a pathology report diagnosising him with cancer of the bladder.  He was bleeding and his Hemaglobin was 5.  He had just recieved 5 units of blood in Cusco the other week.
The Peruvian Urology resident from Lima was on call and had honestly told them that treatment for cancer was in Lima.  The family didn't have money or family in Lima and didn't want to go.  Unfortunately the people don't trust their own countrymen, and so they traveled across town by foot to beg me to let him stay.  I talked with them about the reality of our resources and said that they should talk honestly with the resident.  So they convinced the resident to admit the patient and trasfuse 3 units of blood.
Monday morning we talked about the case all together. That week Dr. David, the German Urologist, did a cystoscopy and found a huge bleeding cancer. He cauterized it the best he could.  He atleast was able to cut back the bleeding significantly.  David said the patient needed a bladder resection, which would have to be done in Lima.
Over a week later Maria Pilar and Andrea's uncle is still admitted and they're trying to convince the family to go to Lima.  Their uncle is not a believer, so this has given us several opportunities encouraging the girls to share their faith with their uncle.  Please pray for this situation.
Posted by Honduras at 5:38 PM