THEY COME IN THREEs--- My first case of Subacute  Thyroiditis 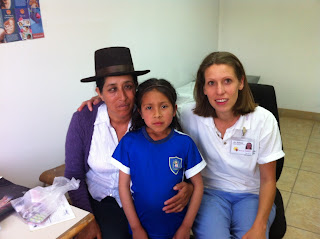 In Medicine there's a saying, "they come in three's." That's to say when one patient presents with a rare diagnosis, two more similar cases follow.  For me it's God's providence.  How best to learn a wierd uncommon diagnosis but to see it three times in a row close together.

Last Friday Celestina was sitting in the Emergency room where I was working.  In her hand was a reference from the local health post that had as a diagnosis "Goiter" and a request for a medicine evaluacion.  Celestina, a 37 year old woman from Curahuasi, reported that a painful mass appeared on the front part of her neck a week earlier.  When I examened her she had a pulse of 97 (regularly regular), no tremor, but a soft mass coming off of the right side of her thyroid.  When I tried to place my hand on the mass to examine it she grabbed my hand and fought me so that I would not touch the exquisitly painful mass.

Her ultrasound showed what looked like a goiter with lots of inflamatory lymph nodes.  Her TSH was low, her free T4 was high. Her CRP was 60 and her ESR was 90.  I had my suspicions from the moment I touched the painful mass.  It'd looked up and ordered the recomended tests.  The results came back as expected.  I talked it over on the phone with Will, the other American FP here, for reassurance since it was my first case.  He says, I've seen one  in my life (and he's in his 40's), but it sounds like it.

In the health post Celestina had already received Diclofenac without relief, so I started treatmeant with Prednisone (steroids) and Propranolol (a betablocker to slow the heartrate).  Since Celestina lives in Curahuasi I had the rare luxary of being able to give her an appointment for Monday to see how she'd responded to treatment (most of our patients come from more than 12 hours away and it's costly to return or stay in town).

Monday afternoon Celestina sat in my exam room smiling as I was able to touch her thyroid without her feeling pain (photo above).

Subacute thyroiditis is an autoimmune attack of the body against the thyroid gland. The first phase the thyroid is clasically very painful and sends excess amounts of thyroid hormone (free T4) into the whole body.  Then the thyroid levels in the body fall low.  And then finally the thyroid recuperates and goes back to normal function.

The treatment is steroids to lower the autoimmune attack (steroids inhibit immune response) and medicines to support symptoms as needed (beta blockers when T4 is high and thyroid hormone when T4 is low).

Wednesday Dr. Martina entered my office to describe to me one of her patients that had the exact same presentation and lab and ultrasound results.  So now we're awaiting number 3!..... 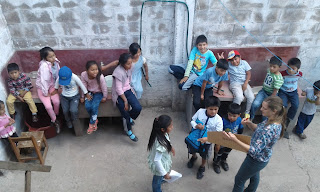 (Above: Sophia, one of the many sunday school teachers that pour into the kids of the church each Sunday.)
Sunday school is fun and a blessing but we continue to use the patio the owner of the building where the church meets.  Please pray for a classroom for the children.  The rains have arrived early and will make meeting in an open patio impossible.

The Two Catagories of Sins of Women
Monday nights the women keep coming for crafts, community and a devotional message. We're currently croqueting jackets, making Bonzae trees with plastic beedes and plastic flower beeds (the last photo below they are painting their miniture flowerpots), and some are working on their own separate projects.

We'd been studying the book of Mark but the women have decided that they'd like to do a study about Being Women of Excellence, that I'd done with the womans group a year ago.  But only one woman is the same as the year before, so here we go.  I was inspired by a sermon that talked about the two catagories of the sins of women: comparison and perfectionism.  Most of our insecurities and daily activities fall in these two sins.  They're sins when they're motivated by what the world thinks.  But when they're motivated by what God wants and thinks of us then He is glorified.  Please pray for the work of God in the heart of each woman to put her value in what God thinks of her and not the world as we start and go through this study. 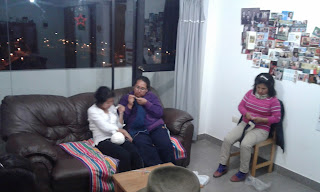 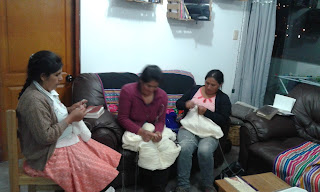 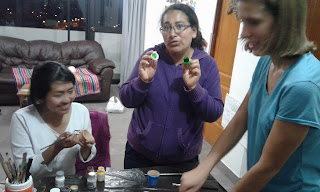 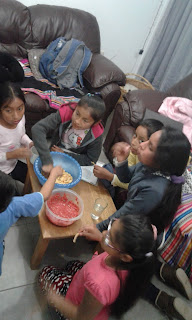 Our discipleship group is the joy of our lives. Please continue to pray for: Maria Pilar, Andrea, Paola, Christian, Igor, Edy, Ivette, Ingrit, Xiomara, and Angie.  We can see their hunger and thrist to know God more and please him, but we also can see the world pulling at them.  Pray that they keep coming and applying themselves, and that God gives them the strength to resist the pressures of their parents, friends, and the world.  We will finish the first of four books in the Discipleship series tomorrow.

Above they are enjoying a snack of Chips (like Ruffles, it's hard to find tortilla chips even in Cusco) and salsa (homemade) after studying for 1.5 hours.  The time after the lesson eating and walking them home has allowed us to grow closer to them and enter a little into their lives. 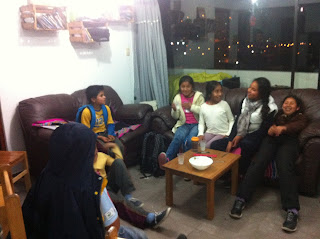 AND THE 7th Day HE RESTED
David and I took our first "real" vacation since the honeymoon.  We took a 13 hour bus ride to Huacachina, a natural oasis located next to sand dunes where you can go sand boarding.  Like snowboarding except that you have to rub wax on the bottom of your board each time before you go down so that you slip over the sand. 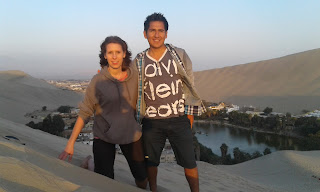 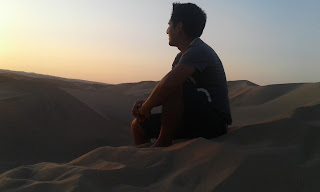 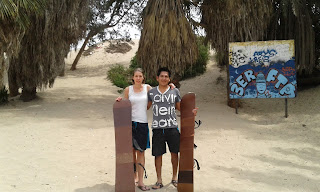 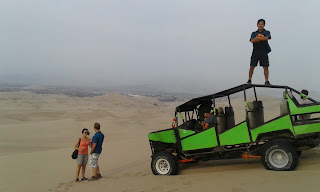 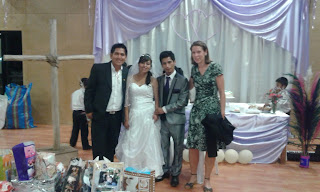 Our good friend Juvenile (who worked before as a nurse in the out patiente clinic and then learned to work the XR and CT machine and moved into the radiology department in Diospi) got married a couple weeks ago.  There's is now the second marriage that has been held in the Diospi Suyana School gym.  He married to another friend of mine from church her in Curahuasi, Rosmery (who's finishing her nursing training).

THE WISE MAN BUILD HIS HOUSE UPON THE ROCK.... 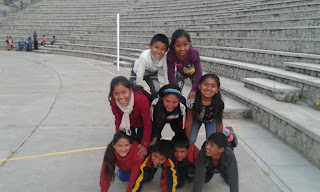 We just finished a lession series about "building" with the Lucmos kids.  David was incharge of a "review game" for the story able the Wise and foolish man.  This is a picture of his Wisest Man human pyramids.  His foolish man human pyramid had all little kids and couldn't build even their second level.

LEARNING TO BAKE A CAKE 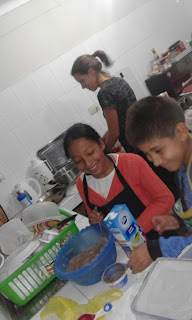 Most of the homes in Curahuasi don't have ovens. Tradicionally they cook with stoves.  When they want to use an oven the go to "the ovens" and pay someone to cook their guinepig or chicken or  turkey for them.  So it's a special occacion.  In David's class he invites the children's parents to bring a cake for their birthday to share together.  But since no one has an oven, they by one and it isn't very cheap.
For various reasons two of David's students had birthdays during vacations and then their parents weren't motivated to send anything with them to school.  They were both sad, so David invited them over to bake their own cake.  I'm always thinking about books like, "When Helping Hurts" because there's already lots of evidence of entitlement from the people recieving so many handouts from the government and missionaries.  So when they come we let them follow the recipe and just supervise them as they make it themselves, so that with pride they serve the cake to their classmates the next day.
Here is Freddy and Silvana baking a Nestle chocolate cake together. 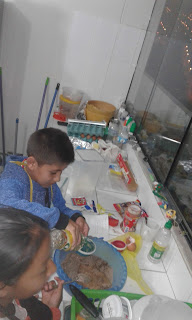 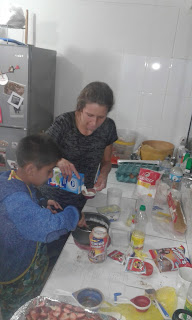 Thanks for your continued thoughts and prayers!
May God continue richly blessing you!!