The greatest spiritual battle I face here is complacency.  At first I thought the spiritual complacency was similar to Tulsa, but now I think it’s worse here because what I see here is Catholic complacency.  A complacent Evangelic Christian in Tulsa will go to church once or twice a week, be a “good person”, and live their life with their own plan and purpose.  A complacent Catholic in Peru claims to believe in God, has no clue what He commands and desires, never goes to church, does whatever they  want with their life, and live lives full of fear and anxiety because they realize they’re not in control.  My greatest struggle is knowing how to awaken their thirst and hunger to know God, walk with Him and seek out his purpose.
But this last week I met a child who has more faith, peace, and joy than all the other patients I’d cared for that week put together.  Yet he has the least reason to.
I’ll call him Eric.  Eric is a 10 year old boy who came to the hospital with his grandmother. His grandmother informs me that a year ago he was running and jumping and playing.  But for the last year he’s been unable to walk.  He complained of a little vague hip pain, but nothing more.  Range of motion was normal without pain on physical exam. Neuro exam was normal except I couldn’t elicit patellar nor babinsky reflexives (neither positive nor negative).  I didn’t think much about those findings because it’s really hard to check reflexives here.  You tell the patients to relax their muscles like they’re dead and so they either start moving the limb back and forth or completely tense up all the muscles of the joint.  It doesn’t matter was language you tell them in, they don’t know how to control their muscles. Nolan, the physical therapist, is always saying how hard this cultural aspect makes his job.  He was a little chubby, so I was thinking Slipped Capital femoral epiphysis.  When he walked, he walked swinging his legs out wide, keeping his knees pretty straight, and sometimes with his toes pointed outwards, sometimes with his toes pointing inward.
I got reviewed the hip and knee x-rays later that day.  Normal.  It was 5 pm by them, so I asked him to come back the next day after I had time to figure out what else I wanted to order.  I read that night.  I consulted the other doctors at our morning meeting on the case the next morning.  I ordered physical therapy eval, CRP (a marker of acute inflammation), ESR (a marker of chronic inflammation), CK (a marker of muscle inflammation), CBC (to check white blood cell count), and a lumbar spine x-ray (so that I could rule out above and below the “problem joint”).
Nolan sees me before lunch and tells me he saw Eric.  Nolan found Eric to have profound proximal lower extremity muscle weakness, trunkal weakness, and positive Gower’s sign (where to stand up they inch their hands up their legs because of lack of proximal muscle strength).  Nolan’s guess was Muscular dystrophy. The x-ray came back normal. The ESR, CRP, and CBC came back normal.  The CK came back 15,000 (normal less than 200 or so).
Duchenne muscular dystrophy is the most common and the most rapidly progressive muscular dystrophy, with most patients losing the ability to walk by 12 years of age and requiring ventilatory support by 25 years of age (which is probably not a possibility in Peru).  It’s rare for them to live beyond 30, even in the USA.
I wanted Eric and his grandmother to understand well what he had, prognosis, and treatment options so I asked Martina to talk to the family with me.  I wasn’t sure if I knew all the right words in Spanish and I wasn’t sure of treatment options available in Peru for him. 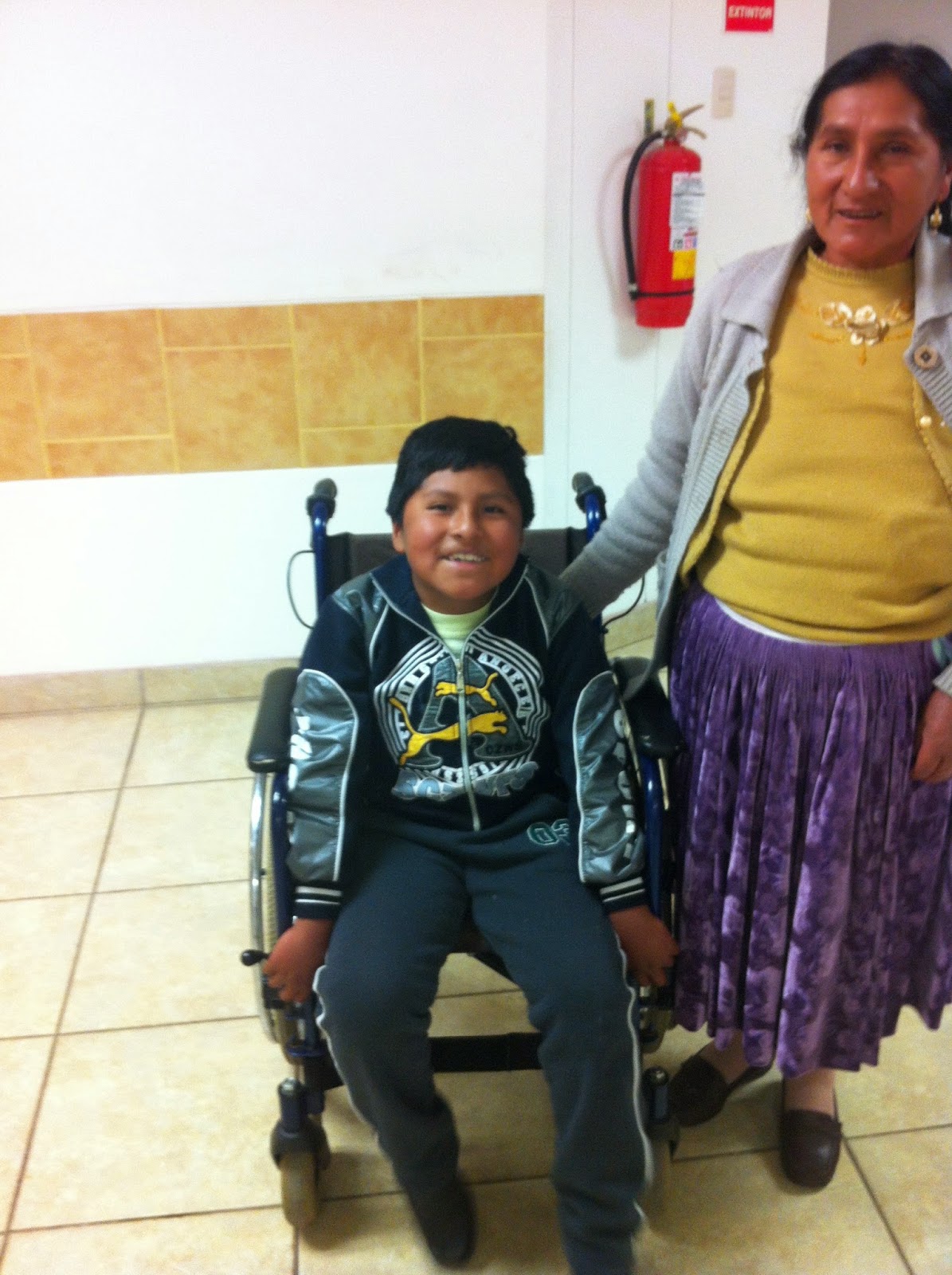 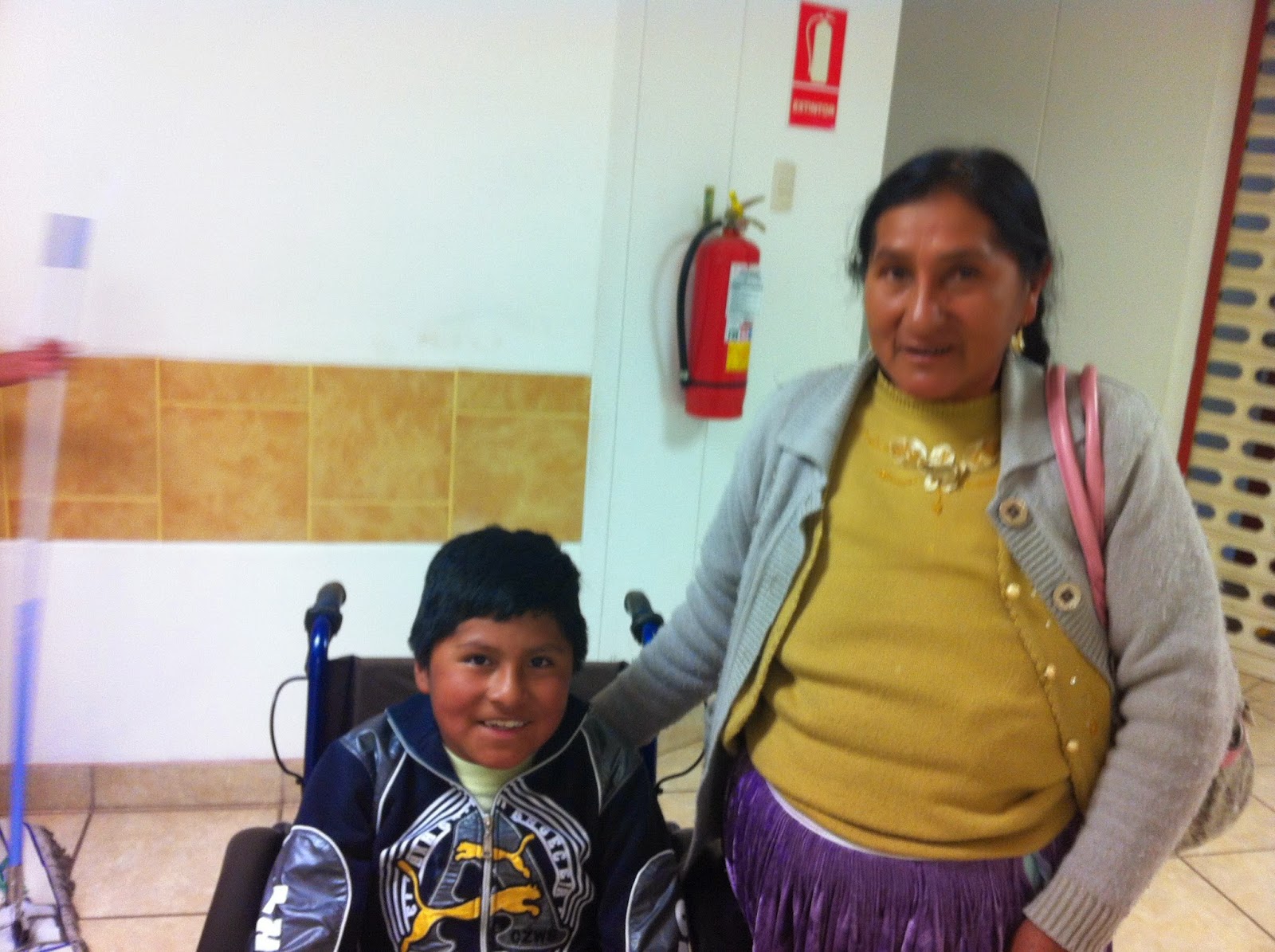 This picture is taken 10-20 minutes after Eric and his grandmother had been told everything. Including the fact that he would never walk again and wouldn’t live much past 25.  I commented out loud on how joyful he appeared.  His grandmother responded, “He loves the Lord.  He asked to buy a Bible while he was waiting these two days.”  The peace I saw in him---the peace that passes all understanding—only comes from the Lord and the Spirit living within you, and is very rare here.  The culture here is one of a life of anxiety and worry.
I commented on this to Juvenal, one of the nurses that was helping me that day.  He responded by saying that he used to worry a lot too.  But since coming to know the Lord, he has that same peace and tranquility of spirit too.
Please pray for Eric and his testimony---that through his hardship many will come to trust the Lord with all of their life.
Posted by Honduras at 7:24 PM